Peru: Cuban Women to Present Achievements in Parallel Event to Summit of the Americas 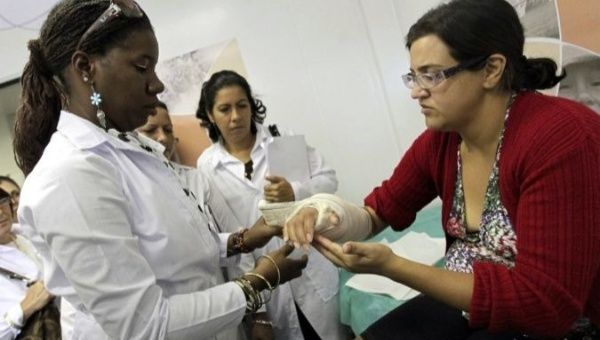 “That is why we are committed to the defense of the Revolution,” said Marisol Perez, a representative of Cuban civil society.

March 22 (teleSUR) Marisol Perez, a representative of Cuban civil society based in Peru, said Cuban women will present achievements they’ve made after the triumph of the Cuban Revolution. The events will run parallel to the VIII Summit of the Americas, which will take place in Lima, Peru next month.

One of the issues that will be highlighted will be Cuba’s drive to attain gender equality and overall empowerment of women, according to Granma.

Perez pointed out that an impressive 80 percent of teachers in Cuba are women. Also, more than 70 percent serve as judges and prosecutors and 60 percent practice medicine.

After the recent elections, Cuba will have one of the leading parliaments in the world regarding female representation. Poll appointments on March 11 guarantees that of the 605 deputies elected to the National Assembly of People’s Power, 53.2 percent are women, a figure surpassed only by Rwanda at 61.3 percent, according to Prensa Latina.

“That is why we are committed to the defense of the Revolution, and from those gains, we continue working because we know that everything is yet to be resolved,” she said.

Perez also participated in the 2nd Forum of Cuban Civil Society ‘Thinking Americas,’ a conference that hosted more than one hundred organizations representing women, students, peasants, workers and other groups.

Attending members agreed to a statement denouncing the presence of Cuban-born citizens and mercenary organizations at the service of foreign governments and institutions at the VIII Summit of the Americas.

The statement also expressed support for the people of Venezuela, as well as that government’s right to participate in the conference. Perez, for her part, defended the rights of Venezuelans to express their viewpoints at the summit to expose their realities.