Over 300,000 Cubans Join Procession to Pay Tribute to Fidel

Posted on December 5, 2017 by Anthony Brenner 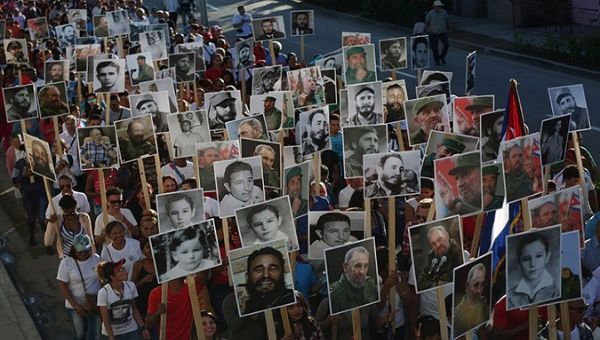 The week surrounding the anniversary of Fidel’s death has been filled with events and tributes for the island’s socialist leader.

Dec 4 (Telesur) Marching from the Plaza Antonio Maceo in Santiago de Cuba to the resting place of the revolutionary leader Fidel Castro, thousands of Cubans gathered to pay tribute to the legend a year after his death.

The ceremony was led by President Raul Castro, who approached Fidel’s tomb in Santa Ifigenia cemetery with the members of the Cuban executive cabinet and government ministers, laying flowers before the monument.

Wreaths, cards and letters adorned the mausoleum where just hours before, the Cuban Revolutionary Armed Forces stood to meet the dawn, keeping guard over the tomb and taking part in the ceremonial lighting of the flame.

Around 300,000 people participated in the morning march, remembering the Cuban revolutionary who led the country from the triumph of the revolution in 1959.

The week surrounding the anniversary of Fidel’s death has been filled with events and tributes for the island’s socialist leader. One of the most popular was Sunday’s concert which attracted artists and cultural groups from around the nation as over 2,000 attendees filled the seats of Heredia Theater for a night of tribute.

Some of the acts included musical compilations from the Cuban Symphony Orchestra as well as solo presentations from pianist Frank Fernandez and saxophonists Cesar Lopez and Evaristo Denis.

Additional entertainment was provided by singers, poets, actors with a special retelling of the attack on Moncada performed by the students of the Jose Maria Heredia Professional Art School.

Tribute to the leader of the Cuban revolution also included photo exhibitions, readings from biographies on his illustrious life, conferences, and events documenting the passage of Fidel’s ashes to his current resting place.