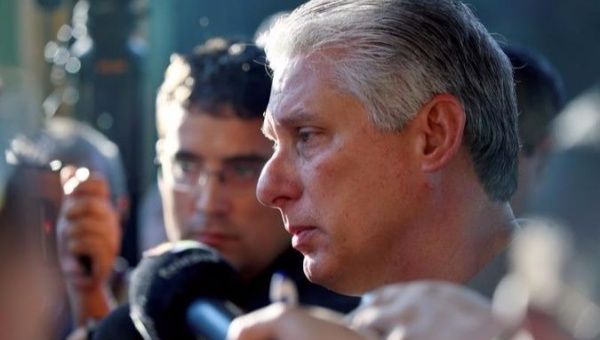 Nov 27 (Telesur) Cuban First Vice President Miguel Diaz-Canel delivered a message of “unity” and “conviction,” amid elections on the Caribbean island to choose representatives from municipalities out of over 27,000 candidates who will be competing for 605 People’s Power Assembly seats.

“Our people don’t bow down, not to a hurricane and even less to external pressure and some people’s desire to see our system change,” Diaz-Canel said in the lead up to the election results.

His comments came during a foreign and state-press conference, according to PressTV, and were in response to recent travel restrictions implemented by the United States, along with a halt to visa authorizations to Cubans at the U.S. embassy in Havana. The measures, claimed to be in response to unconfirmed sonic attacks suffered by U.S. intelligence operatives and diplomats, are accompanied by a ratcheting up of U.S. rhetoric aimed at precipitating political change in Cuba.

Coronel Ramiro Ramirez, head of the Cuban security detail responsible for the protection of diplomats in the socialist country, explained that such an acoustic weapon, even if employed by a third party as U.S. officials have suggested, would have affected the health of other people in the general area and could not have singled out U.S. diplomats as part of a deliberate attack.

Mark Hallett, head of the human motor control section of the U.S. National Institute of Neurological Disorders and Stroke, went a step further, attributing the unexplained ailments experienced by a number of U.S. diplomats to “mass hysteria” prompted by the media, not sonic attacks.

“From an objective point of view, it’s more like mass hysteria than anything else,” adding that “mass hysteria” is the term used for outbreaks among groups of people that are either wholly or partly psychosomatic.

Cuba’s electoral process kicked off with neighborhood meetings to choose candidates for municipal councils. No advertisements, posters, banners or placards littered the street or TV screens during the entirety of the civic and political act held to elect officials to represent their constituency.