(Reuters) – The White House should expand licensed travel for all Americans to Cuba and increase support for civil society on the communist-ruled island, according to an open letter to President Barack Obama signed by an unprecedented group of 44 policy reform advocates and former U.S. officials. 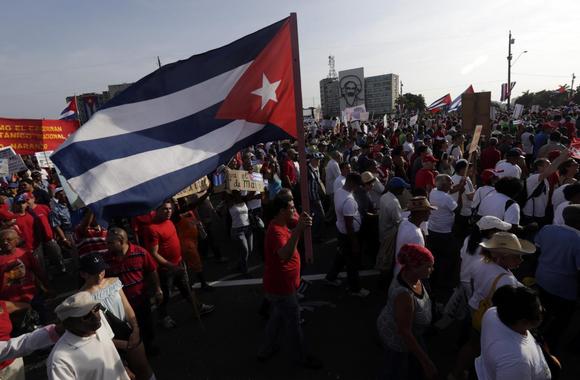 A man waves a Cuban flag in Havana’s Revolution Square during the May Day parade May 1, 2014. Credit: Reuters/Enrique De La Osa

It’s the latest sign of increased pressure on the Obama administration to soften the U.S. Cold War-era policy on Cuba and follows a February poll that found a strong majority of Americans favor loosening the five-decades-old punitive policy of Cuba sanctions.

While stopping short of calling for legislation to end the economic embargo, it lists measures that are within the executive authority of the president and do not require congressional approval.

The recommendations seek to take advantage of a “window of opportunity” created by reforms underway in Cuba to reduce state control in some economic areas and allow the creation of small, privately run businesses.

Reducing U.S. restrictions on travel and financial activity in Cuba would help “by giving greater freedom to private organizations and individuals to directly and indirectly serve as catalysts for meaningful change in Cuba,” the letter said.

Supporters of maintaining tough sanctions against Cuba were quick to reject the proposals.

“History has proven that Castro only eases economic measures when he’s forced to, not as a ‘good-will’ measure,” said Mauricio Claver-Carone, director of the influential U.S.-Cuba Democracy PAC.

By seeking to use executive authority the recommendations involved “circumventing the rule of law,” since the embargo was passed by Congress, he added.

Signatories say the recommendations were vetted by a New York law firm, Shearman & Sterling, which advises major corporations and governments.

Among the recommendations is the expansion of travel licenses to include exchanges by professional organizations, including law, real estate, financial services, hospitality and any area defined as supporting independent economic activity.

It also recommends anyone should be allowed to offer services and send money and goods to Cuba such as telecommunications hardware, cell towers, and satellite dishes.

Additionally, the letter urges the White House to hold “serious discussions with Cuban counterparts” on issues such as national security, migration, drugs and the environment.

Any talks with Cuba, the letter said, should be used as “leverage” to help secure the release of jailed U.S. government contractor Alan Gross, who is serving a 15-year jail sentence in Cuba for trying to set up illegal internet connections in Cuba.

“The letter is a very rational, common-sense request,” said Joe Garcia, a Cuban American congressman from Miami. “The president’s policy of allowing more travel and remittances to Cuba has produced more change in Cuba in the last five years than the previous 50 years.”