Omara Portuondo and Diego El Cigala to Sing Together in 2016 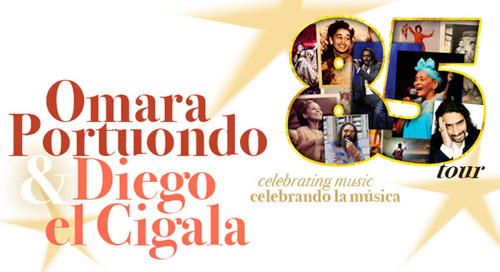 HAVANA, Cuba, Dec. 31 (acn) The Diva of the Buena Vista Social Club, Omara Portuondo, and flamenco singer Diego El Cigala, will celebrate in 2016 the 85th birthday of the first, with a tour of Europe that will join the voices of these two worldwide known artists on stage.

Omara, also known as the Bride of Feeling, confirmed in the social networks that this European tour will serve to honor the cultural expression that unites both singers.

“With great hope and thrilled I share with you the news that El Cigala and I will be carrying out together the 85 Tour through Europe,” said Omara, referring to the exceptional travel companion she will have, winner of many Grammy Awards.

The diva has promised to cover the different moments of her artistic career in this tour, from her beginnings with Las D’Aida until her recent presentations with the Buena Vista Social Club and her interpretations of traditional music.

It was at the Hollywood Bowl in Los Angeles, California, where Omara and Diego coincided for the first time on stage, and the intensity of the encounter was such that they felt the need to participate in a larger and longer project together.

Previously, the flamenco singer also approached Cuban music through collaborations with prestigious figures of the island’s music scene, such as jazz musician Bebo Valdés, in the album Lágrimas Negras.
El Cigala has over a dozen albums so far, among which Romance de la luna Tucumana (2013), Picasso en mis ojos (2005) and Corren tiempos de alegría (2001), among others, excel.