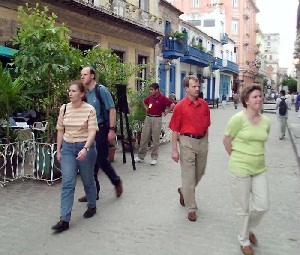 Tourism company Habaguanex S.A of the Havana City Historian’s Office ends 2015 with a positive economic outlook, while aiming for greater specialization of its products next year, Luis Enrique Sotolongo Otero, president of the entity, told the press.

He spoke regarding plans for 2015, the majority of which have been surpassed, due mainly to the rise in foreign tourist arrivals to the Caribbean island, which from January to November reached 3,108,551, representing a more than 17% increase as compared to the same period last year, according to the National Office of Statistics and Information (ONEI).

“Our hotel facilities have seen excellent results,” noted Sotolongo, “we have finished with a 119% increase in income, and 188% in profits, demonstrating greater efficiency. We have been focusing efforts on accommodation availability, with greater demand seen over the last months of the year.”

The Habaguanex chain, founded in 1994, manages a network of hotel and non-hotel establishments in the city’s Historic Center of Old Havana, which sit among heritage and cultural sites, and benefit from the vitality, beauty and charm of an eclectic city, where colonial, republican and modern day history converge.

In regards to food services, Sotolongo commented on the competition generated by establishments affiliated with other chains and private or family run businesses. He noted that this competition means Habaguanex facilities are forced to continually improve. “It obliges us to strengthen our efforts, our creativity, with a focus on providing top places, products and authentic offers,” he stated.

Habaguanex’s top foreign tourist markets for 2015 were France, Germany, the UK, Italy and the United States, the latter seeing a substantial increase following the announcement of the process toward the reestablishment of diplomatic relations between Cuba and the U.S. on December 17, 2014, with the resulting opening of embassies in Havana and Washington, respectively.

For 2016, efforts will be directed toward new investments to increase tourist accommodation capacity, utilizing establishments and buildings which previously served other functions. Featuring in this regard are the five-star hotels Catedral, Monte Hermoso, Real Aduana and Cueto.
The chain’s accommodation facilities offer panoramic views of Old Havana’s main streets and squares, 100% authentically Cuban products, and personalized intra-hotel services.
Among the most popular establishments this year are the Florida bar-restaurant and the Saratoga, Conde Villanueva and the Palacio del Marqués de San Felipe hotels.

Sotolongo highlighted that Habaguanex provides accomodation services for cruise ship visitors arriving to the Port of Havana (2015 saw 8,611 tourists arrive by this means).

Cruise ship passengers arrive directly to the Historic Center, frequenting the bars, cafes, restaurants and shops nestled within the zone.
Orlando Ramos, president of Habaguanex’s San Cristóbal Travel Agency, specializing in historic-cultural and heritage tours, noted that work is already underway on a business portfolio which will be presented during next year’s International Tourism Fair FITCuba-2016 featuring excursions around Old Havana and tours of the waterfront towns of Regla and Casablanca, as well as tourist packages offering visits to other important sites of the city, with a focus on explaining their history.

Habaguanex and its San Cristóbal Travel Agency constitute a unique brand, playing witness to and participating in the renovation of Old Havana, founded 496 years ago and declared a UNESCO World Heritage Site in 1982.