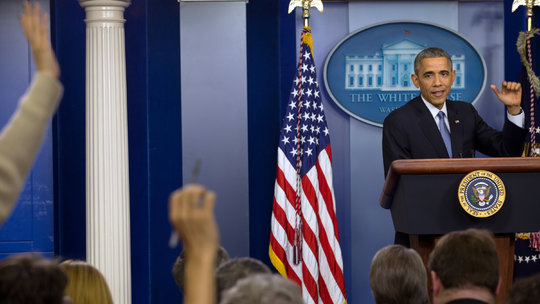 WASHINGTON — President Obama on Friday rejected critics who say he should not have opened American relations with Cuba because of that nation’s human rights record, saying the historic thaw would give the United States more sway with the Cuban government.

“I share the concerns of dissidents there and human rights activists that this is still a regime that represses its people,” Mr. Obama said at a wide-ranging news conference that ended a period of extraordinary domestic and foreign policy changes at the White House.

But even as he acknowledged that Cuba might take actions the United States opposes, the president said that “the whole point of normalizing relations is that it gives us a greater opportunity to have influence with that government.”

It was the first time that Mr. Obama took questions from reporters since his announcement on Wednesday that he would move toward normalizing relations with Cuba, establish an embassy in Havana and relax trade and financial restrictions that have been in place for nearly a half-century.

The president also scolded Sony Pictures for pulling back the movie “The Interview” after a cyber attack that his administration is blaming on North Korea.

“I think they made a mistake,” the president said. “I wish they would have spoken to me first. I would have told them, ‘Do not get into a pattern where you are intimidated by these kinds of criminal attacks.’ ”

“They caused a lot of damage, and we will respond,” the president said. “We will respond proportionally, and we’ll respond in a place and time and manner that we choose.”

Overall, the president used his annual late December news conference to make the case that he has brought about an American economic resurgence, burnished American leadership credentials around the world and given hope for a new phase of compromise with the Republican Congress.

“We’ve set the stage for this American moment, and I’m going to spend every minute of my last two years making sure that we seize it,” he said.

On Cuba, Mr. Obama said he had no plans to visit the island in the near term. But he recounted a friendly telephone call this week with President Raul Castro of Cuba. Mr. Obama said the two joked with each other about being long-winded and about Fidel Castro.

After Mr. Obama apologized for speaking for so long during the call, he said, Mr. Castro told him: “You’re still a young man, and you have still the chance to break Fidel’s record: He once spoke for seven hours straight.”

The president’s remarks came as he faced questions about how his administration would respond to the North Korean cyber attack and manage the historic opening with Cuba, as well as an array of other foreign and domestic challenges.

The news conference ends a six-week period when Mr. Obama aggressively used his presidential powers to take sweeping unilateral action on immigration, re-establish diplomatic and commercial ties with Cuba, strike a climate agreement with China and press for strong rules on keeping the Internet free and open.

Mr. Obama suggested he had no intention of backing down on that approach.

Mr. Obama told reporters that he was genuinely eager to forge compromises with the Republican Congress, including on revamping the nation’s tax system, and said he would push for changes that make it simpler and fairer. He said he had been encouraged by conversations with some Republican leaders.

“I want to work with this new Congress to get things done,” the president said. “We’re going to disagree on some things, but there are going to be areas of agreement, and we’ve got to be able to make that happen, and that’s going to involve compromise once in a while.”

He said the lame-duck session of Congress that closed this week showed that “perhaps that spirit of compromise may be coming to the fore.”

Mr. Obama said he would push for changes to rules that allowed companies that are in the United States to move their headquarters “on paper” to another country in order to avoid taxes.

“I think that needs to be fixed,” he said.

After the news conference, Mr. Obama was scheduled to leave for his annual family trip to Hawaii.