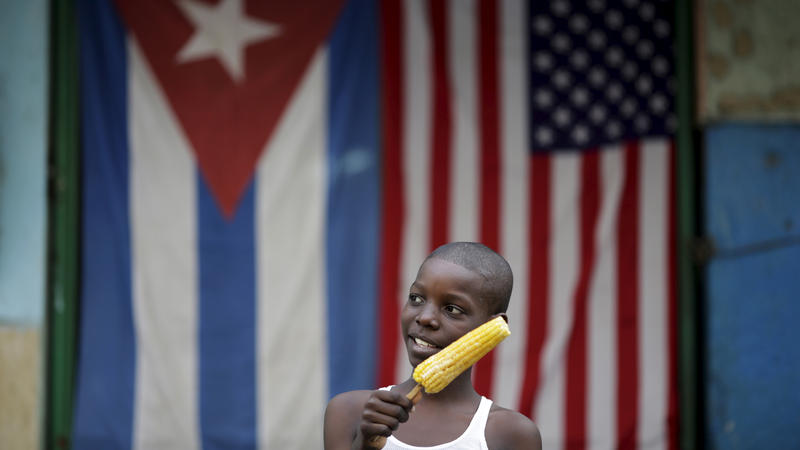 For more than 50 years, Cuba was an enemy of the United States. But not every American has seen Cuba as a threat.

“You know, I tell folks all the time, I wake up every morning worried about something, but being invaded by Cuba is not one of them,” says Larry Wooten, president of the North Carolina Farm Bureau.

In 2000, the US economic embargo was loosened to allow American farmers to export to the island. The US quickly became the largest agricultural exporter there. But no longer. US exports to Cuba have fallen off a cliff, down 48 percent from 2014 to 2015. And many American farmers say the US needs to fix that.

Wooten has been leading groups of farmers to Cuba to look at ways to increase exports there. To him, it’s a natural fit.

“Here we can ocean-barge pork and poultry to Cuba,” says Wooten. “Some of the worst chicken I ever ate in my life was in Cuba when I went back in ’98. But when we were there last September the food had improved.”

His state can claim some credit for that. North Carolina exported $5 million worth of poultry products to Cuba last year.

Cuba hasn’t come up much on the campaign trail in this presidential election. But a few days ago, Donald Trump did mention the country, saying he’d reverse concessions made by the Obama administration, such as the easing of remittances and travel restrictions. Hillary Clinton has declared: “The Cuba embargo needs to go.”

The Farm Bureau doesn’t take sides in elections, Wooten says. But he will say that the US should continue to ease restrictions on US tourism to the island.

His farmers can provide that.

Harding considers himself a small farmer, and he sells locally. Cuba really isn’t on his radar. That said, he’s a businessman, and a proponent of more international trade.

“The more we export as a country, because we overproduce in the United States, the higher the price is going to be,” says Harding.

The more sweet corn that’s sold to Cuba, the less there will be on the US market. So, the price for local corn would go up.

“It’s a world market, no matter how small you think you are on this farm,” says Harding.

Agriculture is a $13 billion industry in North Carolina. Cuban exports are just a tiny drop in that bucket. But they still matter, says Blake Brown, an agricultural economist at NC State University.

“It’s a new market. The growth in product [Cubans] consume as their income grows will be very substantial. And it’s right off our shores, so you’d be kind of crazy not to look at trying to move into that market,” says Brown.

But selling crops overseas is complex in the 21st century. American farmers need to help poorer nations finance their purchases. The US Commerce Department often helps with that. But there are prohibitions against issuing US credit to Cuba, and that’s hurting North Carolina farmers.

“So they had to be creative and find offshore financiers, maybe in Europe. I think Spain has been doing a lot of it,” says Brown.

The bottom line: It’s easier for Cubans to do one-stop shopping buying directly from another country and financing the purchase there. The result: US farm exports to Cuba have steadily fallen over the past few years. The European Union, Brazil and Argentina have eclipsed the US.

But American farmers should have the upper hand exporting to Cuba, even with the decades of mistrust between the two governments.

“I expect that proximity and value would win out over ideology,” says Jennifer Harris with the Council on Foreign Relations. “In fact, that’s what you’ve seen by and large. The story of Cuba right now is one that is firmly heading in the direction of capitalism and respecting market physics.”

Farmer Shawn Harding says you never hear about American farm interests in Cuba from the presidential nominees. In fact, you don’t hear much about farm interests at all.

“Farmers are 2 percent of the population. We are a very, I think, important part of the population, but that’s not a big voting bloc. And so I understand that both candidates are playing to get where they can get votes,” says Harding. “But it’s disappointing that we don’t hear more talk about our agriculture policy in this country.”