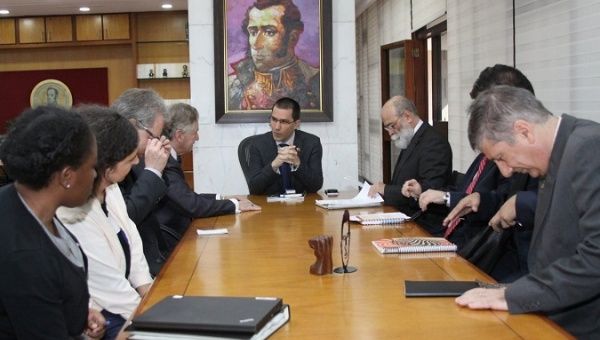 The expert said that the international community must be made aware of the dismal impact U.S. sanctions have had on the country.

Dec 5 (Telesur) There is no humanitarian crisis in Venezuela, declared UN expert Alfred De Zayas Tuesday, having spent a week in the country assessing the situation there.

“I agree with FAO (Food and Agriculture Organization of the United Nations) and CEPAL (Economic Commission for Latin America and Caribbeans), who report there is no humanitarian crisis in Venezuela, although there may be some shortages and delays in distribution,” said De Zayas, who is from the UN Organization for the Promotion of a Democratic and Equitative International Order.

The expert said that the international community must be made aware of the monopolies, smuggling and corruption that has emerged under the U.S.-led “economic and financial war that includes sanctions and pressures.”

Condemning the media campaign against the country, he affirmed that dialogue will be key to protecting human rights there. In that vein, De Zayas praised President Nicolas Maduro for his consistent efforts to dialogue with the opposition

The expert will soon present his findings before the UN Council of Human Rights in March 2018.

During the 36th session of the Human Rights Council on September 11, Venezuelan Foreign Minister Jorge Arreaza announced that they will be inviting three special rapporteurs to visit Venezuela in the coming months, with De Zayas having been one of them.

Last month, the U.S. administration added 10 more Venezuelan officials to the list of people under sanctions, with 40 people — including Maduro — on the list from beforehand. The new targets included electoral officials and also the head of the government’s main food distribution program.

While Venezuela does have a food crisis that has resulted in mass food shortages, the blame is often pinned on the country’s socialist government. Government officials accuse right-wing opposition forces and their allies in the private sector and in international finance of intentionally sabotaging the economy.

Last year, over 750 opposition-controlled offshore companies linked to the Panama Papers scandal were accused of purposely redirecting Venezuelan imports of raw food materials from the government to the private sector.

International sanctions, in turn, have blocked millions of tons of food and other supplies from reaching the Venezuelan people.