Nicolás Maduro: “ALBA is here, with the banners of Bolívar and Martí” 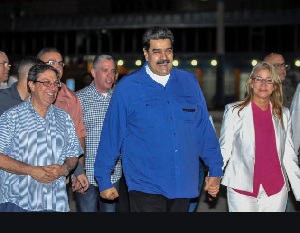 Dec 14 (Cubadebate) Near midnight, the President of the Bolivarian Republic of Venezuela, Nicolás Maduro Moros, arrived at José Martí International Airport, saying he was excited to participate in the XVI Summit of the Bolivarian Alliance for Peoples of Our America-Peoples Trade Agreement (ALBA-TCP), more than 20 years after the first embrace between Fidel Castro and Hugo Chávez.

“First I want to recall that 24 years ago, at this very same time that I am landing, Comandante Chávez arrived with all his dreams and energy. It was 1994, and also a December 13, and Fidel was waiting for him here,” Maduro noted.

“No one knew, nor did anyone imagine, the story that was to be written, for our continent,” he added, moments after being greeted on the tarmac by Cuban Foreign Minister Bruno Rodriguez Parrilla.