Nicaragua’s Crisis – the Latest Stage in a Permanent War 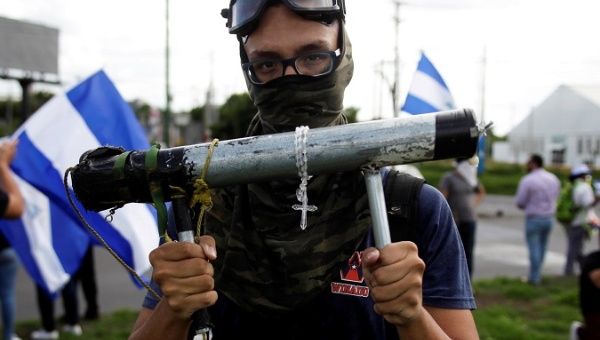 A demonstrator holds a homemade mortar during a protest against the government of Nicaragua’s President Daniel Ortega, in Managua, Nicaragua June 17 2018.

The current crisis in Nicaragua is an intense escalation of the long-term US and allied strategy to destroy the Sandinista Front for National Liberation, very much part of the unrelenting regional assault on Cuba and Venezuela.

June 17 (teleSUR) Nicaragua’s opposition paramilitary intimidation and media terror campaign have brought fear, insecurity, and hardship to around 30 of Nicaragua’s 153 municipalities. Only President Daniel Ortega’s commitment to peace has prevented an even worse conflict. Almost as disturbing as the extreme sadism of the opposition paramilitaries in Nicaragua is how their supporters and media displace opposition crimes by attributing them to the government. On June 14th Nicaragua’s Commission for Truth Peace and Justice, sworn in by the country’s National Assembly, reported 168 people dead and over 2100 injured.

Without assigning blame, the Commission’s figures included 8 police killed with over 200 injured and also reported the appearance of torture and kidnapping among the abuses. Until the extremist opposition provoked the current crisis, such crimes have been unheard of in Nicaragua since the war of the 1980s. Like their counterparts in Venezuela, the Nicaraguan opposition exhibit all the classic characteristics of psychopaths. Opposition political representatives are obsessed with imposing control by force and unwillingness to compromise. Opposition paramilitaries lack any empathy and attack with brutal sadism. The opposition media trademark is relentless, insistent, cynical deception.

On Saturday, June 16th, 6 people in Managua died in a fire started by opposition paramilitaries. Elsewhere in Managua, two people were murdered, one of them set on fire in the street. Opposition representatives, supporters and media attribute all those deaths at the hands of their paramilitaries, to the government. As a condition of the national dialogue Nicaragua’s police withdrew to their quarters. But opposition paramilitaries then besieged them in Masaya, Matagalpa, Jinotega, Mulukukú and elsewhere, killing and wounding police officers while shamelessly accusing the police of attacking them.

On the evening of June 13th, Sandinista student leader Leonel Morales was kidnapped by opposition paramilitaries, tortured, shot and subsequently left for dead dumped in a drainage canal. He was found barely alive and remains in hospital in intensive care. Morales participated in the national dialogue as elected leader of the UNEN student body in the private UPOLI university, until recently a base for opposition paramilitaries and at least one allied criminal gang, whose leaders are now under arrest. On June 15th, health Minister Sonia Castro reported 55 ambulances damaged or stolen, numerous health centers and hospitals damaged and 4 hospitals invaded by opposition paramilitary gangs.

Even those attacks and abuses the opposition media attribute to the government, along with many attacks on government and municipal offices and dozens of opposition paramilitary murders. Similarly,  in contrast to the Nicaraguan Truth Commission’s June 14th incomparably more professional presentation, the June 13th communique of the Inter-American Commission for Human Right restated the systematic false witness of opposition human rights organizations. The IACHR communique avoided any condemnation of opposition paramilitaries and aggressively accused the government of most of the violence.

For its part, the Nicaraguan government energetically condemned the IACHR communique as “biased, not impartial and lacking objectivity by untruthfully attributing to the State deeds it did not commit.” The horrific incidents on the morning of June 16th will be a real test of the IACHR’s veracity. The victims were all Sandinista supporters while the attackers were clearly opposition paramilitaries and associated delinquents. If the IACHR parrots opposition falsehoods that the crimes were committed by supporters of the government, it will greatly undermine confidence not just in the IACHR but in the broader Organization of American States mission of advice and accompaniment.

Despite everything, the national dialogue advanced on June 15th when the government again confirmed its readiness to receive international missions to help solve the country’s political crisis. After much stonewalling, the opposition and the bishops mediating, perhaps influenced by the presence of the new Vatican emissary to Nicaragua, finally accepted the government’s insistence on an agreement to remove the roadblocks paralyzing Nicaragua’s economy. But almost immediately, on the evening of the 15th, the opposition held a press conference in which they denied the roadblocks would be removed. On the morning of the 16th came the horrific terror attacks in Managua. Both events were clearly aimed at sabotaging the national dialogue. Even so, on the afternoon of the 16th, an agreement was reached on the agenda for discussion to begin on June 18th of potential electoral and judicial changes.

The opposition will probably delay dismantling the roadblocks and continue their terror attacks to extort maximum concessions from the government. But opposition extremists also hope to provoke the use of security forces to clear the roadblocks, kill the national dialogue and offer a pretext for international condemnation or some kind of intervention. This follows the model of the US controlled but volatile opposition in Venezuela. While some observers suggest the US government does not want Nicaragua to collapse, fearing even more migration to the US and increased organized crime, few believe the US power elites and their government worry about the well-being of people in Central America.

No single factor explains what is going on in Nicaragua, where a shifting kaleidoscope of interests makes events confusing and unpredictable. While the Sandinista government is negotiating in good faith, US Senate Foreign Relations Committee’s Bob Corker’s June 11th visit to Managua offered another example of splits between mainstream US Republicans, the erratic Trump administration and the sinister US anti-Cuban mafia supporting Nicaragua’s opposition extremists. Nicaragua has strong relations with Japan, Taiwan and South Korea, whose business communities are probably lobbying against destabilizing Nicaragua. Caribbean nations in the OAS are probably also defending Nicaragua, just as most of them have defended Cuba and Venezuela.

Since the Nicaraguan opposition is as divided as their Venezuelan opposition counterparts, it may suit the US elites not to push for elusive outright regime change. The US elites’ Nicaraguan allies provoked the current crisis because they have failed electorally. By insisting on a political solution instead of deploying the country’s security forces, the Sandinista government has probably kept intact Nicaragua’s recent structural electoral loyalties whereby around 50% support the FSLN, 30%-35% support the opposition and 15%-20% are independent. The opposition needs all the independent votes to win the Presidency or a majority in the legislature, theoretically possible but hardly likely.

The national dialogue is discussing bringing forward the elections scheduled for 2021 and external factors like US sanctions or OAS intervention will tip Nicaragua’s electoral politics in favor of the opposition. But the crisis may backfire against the opposition in electoral terms depending on how susceptible people are to the constant psychological warfare. The opposition does not have a viable candidate nor do they have any social policy proposals, while their economic proposals have been banal, self-serving neoliberal gobbledygook. So the opposition may choose to argue for elections in late 2019 or early 2020, giving US elites time to create the necessary electoral conditions for an opposition victory.

Another obviously important factor in electoral calculations is security and organized crime. For the foreseeable future, the extremist opposition will continue a policy of provocative attacks and intimidation, creating uncertainty and insecurity that may shape electoral intentions in unpredictable ways. Security policy counteracting organized crime and opposition terrorist violence should work in favor of the government because people want peace and stability. More fundamentally, the government will focus on domestic productivity and ensuring food security to counter economic consequences of the crisis such as higher unemployment, more migration, lower investment, capital flight and higher business costs resulting from the crisis.

The government will also try and shape patterns of consumption and investment so as to prevent a damaging balance of payments crisis forcing resort to the International Monetary Fund. Another obvious intention of the US instigated crisis has been to attack the popular economy and the government’s capacity to maintain subsidies. Cuts in current subsidies to electricity and transport for low-income families would seriously diminish the value of the annual minimum wage increases since 2007. The same applies to the government’s successful social programs, health care and education. All these factors will affect any electoral outcome.

The current crisis in Nicaragua is an intense escalation of the long-term US and allied strategy to destroy the Sandinista Front for National Liberation, very much part of the unrelenting regional assault on Cuba and Venezuela. The US elites’ defeat in Eurasia forces them to consolidate control in the Americas and prevent a Chinese controlled Nicaraguan canal, as well as countering Russian influence. The US elites also want to crush Nicaragua’s economically successful, socialist-inspired, redistributive popular economy and its integrationist regional policy which threatens US control.

The US power elites’ failure overthrow Venezuela’s government has made changing or weakening Nicaragua’s Sandinista government more urgent. Regime change in Nicaragua would also remove its obstruction of global US and allied foreign policy goals in relation to, for example, Venezuela and Cuba or Palestine and Iran. The current coup attempt in Nicaragua is not merely a short-term political event but rather an intensification of the US elites’ permanent war on the impoverished majority in Latin America. The immediate priority for Nicaragua’s Sandinista government is to avoid armed conflict, achieve a peaceful settlement and endure.