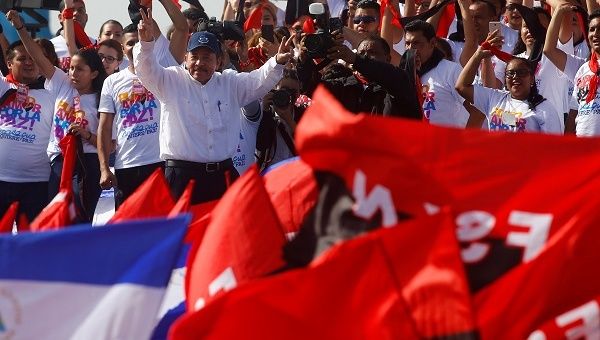 Speaking at the 39th anniversary of the Sandinista Revolution, Ortega told supporters: “Peace must be defended every day to avoid situations like these being repeated.”

July 19 (teleSUR) Nicaragua’s President Daniel Ortega called on supporters Thursday to defend peace and reinstate the unity that existed in the nation before violent opposition protests broke out in April.

Speaking during celebrations marking the 39th anniversary of the Sandinista Revolution, Ortega told thousands of supporters: “Peace must be defended every day to avoid situations like these being repeated.”

Ortega said right-wing opposition groups, believed to be financed by the United States, are trying to destabilize the country and end the peace that had existed during the last 11 years of his administration.

At the event attended by the foreign ministers of Cuba and Venezuela, Bruno Rodríguez Parrilla and Jorge Arreza, Ortega described how the coup attempt unfolded over the past three months.

Ortega told the crowds that the plan was initially executed via social networks in order to launch ‘civic protests,’ which swiftly turned violent after being co-opted by the opposition, with universities used as command centers.

Violent opposition groups had used the government’s proposed social reforms as an excuse to provoke national protests, Ortega said. When the reforms were later withdrawn, however, the violence continued.

Ortega laid much of the blame at the feet of the bishops of the Episcopal Conference of Nicaragua, who he described as “coup leaders” for collaborating with the opposition during the national dialogue.