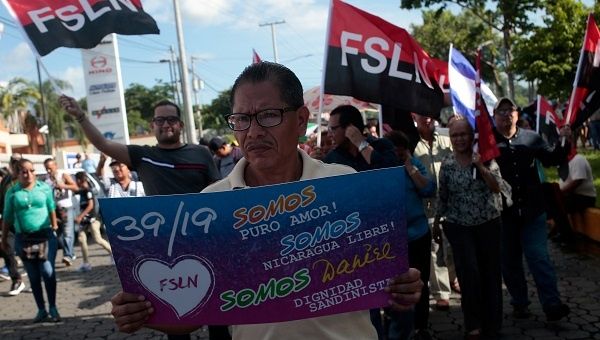 A supporter of Nicaragua’s President Daniel Ortega holds a sign that reads “We Are Daniel” during a march in Managua. | Photo: Reuters

Defeated opposition leaders hoped to impose their coup, failed because they lacked popular support and now have to accept what the Sandinista government is prepared to agree.

July 4 (teleSUR) The murder of Miguel Ramos on July 3 focuses many aspects of the current crisis in Nicaragua to do with conflicting claims of legitimacy involving fundamental issues of civil and political rights and social and economic rights. In 1978 and 1979, as a teenager in the Carlos Fonseca Northern Front guerrilla column, Miguel fought for Nicaragua’s sovereign independence. On July 3 he died for that same cause, gunned down by supporters of the U.S.-backed right-wing coup in progress against the Sandinista government of President Daniel Ortega. Miguel was one of a group of civilians helping the authorities clear an opposition roadblock at La Trinidad on the Panamerican Highway about 20km south of Esteli.

On July 3, Carlos Ascencio, El Salvador’s ambassador, published an appeal on behalf of all the Central American ambassadors in Nicaragua to clear similar roadblocks in Jinotepe. His letter provides independent corroboration of the violent intimidation and extortion practised by opposition gangs who have operated these roadblocks for two months, strangling Nicaragua’s economy and abusing people’s basic rights.

Ascencio denounces the effective detention of 400 truck drivers and their vehicles near the town of Jinotepe for over a month. The drivers, from all over Central America, have been threatened and their vehicles damaged. The political opposition activists operating the roadblocks refuse to liberate the trucks and their drivers because “they are our protective shield and negotiating card to support our demands in the dialogue.”

A Focus For Murder

That is just one of the innumerable gross human rights abuses by the right-wing opposition forces promoting the attempted coup in Nicaragua. For two months the road blocks, operated by opposition paramilitaries and paid thugs, have been a focus for murder, torture, kidnapping, intimidation, extortion and criminal delinquency. Supporters of the coup turn that reality upside-down, blaming the resulting violence on the government. In their upside-down world, ordinary citizens organizing to defend their rights against armed and violent opposition gangs metamorphose into ‘Sandinista paramilitaries.’

In the case of Miguel Gomez, the opposition have already portrayed the incident in which he died as a government paramilitary attack on peaceful protesters. They will add Miguel’s death to the tally of their own casualties, even though he died at their hands. Abundant documentation and audio-visual evidence exists now disproving categorically the constant falsehoods propagated by U.S.-funded opposition human rights organizations and local Nicaraguan opposition media. The original list of 55 deaths, proclaimed with such theater on the first day of the National Dialogue, has been completely debunked. There was never any ‘student massacre.’

Other material exposes media and NGO manipulation of opposition marches, or the deaths of women during the crisis. Numerous videos demonstrate the sadistic violence of opposition activists. Various writers like Alex Anfruns have explained the systematic pattern of media distortion and manipulation of opposition attacks and abuses reported by opposition media and NGOs as government human rights violations. No Western corporate media and only a handful of alternative media publish this material or any version challenging the demonstrable false witness of Amnesty International and the Inter-American Commission for Human Rights (IACHR).

Just as in the case of Venezuela, those organizations have failed to investigate impartially any of the incidents they report, merely recycling the version already prepared for them by U.S.-funded local NGOs and media and ignoring or rejecting documentation from the Nicaraguan authorities out of hand. IACHR Director Paulo Abrao effectively disqualified himself as an independent arbitrator during a visit to Nicaragua last May, when he was recorded publicly declaring his support for the opposition. The investigative process accompanied by a group of IACHR experts had not even begun when, on June 22, the IACHR presented their final report to the OAS Permanent Commission.

Perhaps as the political price of avoiding – at least for the moment – the kind of all-out economic and diplomatic assault applied to Cuba and Venezuela, the Nicaraguan government has accepted these gross methodological irregularities and the blatant political bias of the OAS and its IACHR subsidiary. For its part, the Comission for Truth, Justice and Peace appointed by the National Assembly has actively sought an exchange of information with the opposition human rights organizations. As Commission member Cairo Amador has explained, “It’s a matter of everyone providing their data and their versions so, in the end, everyone contributes to getting at the truth.”

But as Esteli Mayor Francisco Valenzuela has pointed out, the effects of the attempted coup are much broader than the civil rights violations: “The damages can definitely be classified in order of importance. First, the suffering and the victims that we all lament. Secondly, everything to do with the economy and with people’s freedoms, the roadblocks that impede freedom of movement and have affected employment. The inability to move goods and products for export has caused enormous financial losses. Tourism has suffered nationally and locally, especially small businesses. Most businesses in Nicaragua are small- or medium-sized and have been very badly affected. A lot of business have closed.” Economy Minister Ivan Acosta has stated: “Growth projections for the economy were 4.5 percent to 5 percent, but now we think the economy is not growing. 200,000 jobs have been lost, which affects social security, trade, domestic demand and real productive activity.”

Nicaragua’s municipal authorities report losses to vehicles, machinery and equipment of over US$10 million and to buildings and infrastructure of over US$112 million. The country’s technical training institute reports losses of US$80 million. The Ministry of Education reports over 60 schools attacked and damaged. A preliminary MINSA report in June reported 55 ambulances destroyed or damaged, as well as other damage to hospitals and health centers, all resulting from opposition attacks. The Infrastructure and Transport Ministry also reports extensive losses, for example damage valued at US$1.5 million from just one incident, when opposition activists attacked a plant in Sebaco and destroyed equipment.

None of that extraordinary level of violence and destruction figures anywhere in the reports by Amnesty International or the IACHR, nor the abuse of the basic rights of the government workers and local population involved. Similarly, neither those organizations nor the Western media have reported the role of criminals contracted to operate the opposition roadblocks and carry out attacks. On June 30, Nicaraguan police arrested Salvadoran mara leader Oscar Rivas Carrillo, who confirmed he and other criminals were being paid to operate roadblocks, carry out murders, burn public buildings and attack economic targets. Rivas and other criminals worked jointly with opposition activists supported by right-wing business interests, U.S.-funded NGOs, right-wing political parties and the Catholic Church.

Clearly, Amnesty International and the IACHR have deliberately covered up that reality and misled international opinion, faithlessly exploiting their image as defenders of human rights, just as they do on Venezuela and Cuba. Even so, despite the extreme violence and the egregious dishonesty of its apologists, the U.S.-backed right-wing opposition coup to oust President Daniel Ortega has failed. People in Nicaragua overwhelmingly support efforts to return to normality and a political solution to the crisis. The Nicaraguan authorities will tolerate the IACHR’s theatricals for another few months before the OAS circus eventually moves on. Defeated opposition leaders hoped to impose their coup, failed because they lacked popular support, and now have to accept what the Sandinista government is prepared to agree as the sovereign power in Nicaragua. Miguel Gomez did not die in vain.