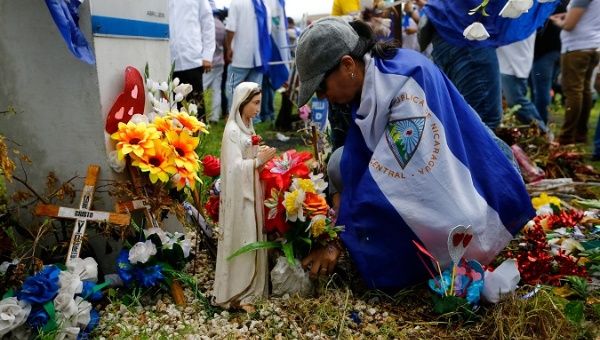 A woman places flowers at a memorial for the victims killed in recent protests after participating in a march. | Photo: Reuters

UN Secretary General Antonio Guterres says he has grave concerns about the current state of the Central American country.

July 12 (teleSUR) In a unanimous sue for peace, international organizations condemn the violent protests which have raged across Nicaragua since early April.

From the Catholic Church to the United Nations, activists are calling for an end to the demonstrations organized by the U.S.-backed, far-right opposition forces.

“He urges all parties to respect the role of the mediators, to refrain from the use of violence, and to fully commit to participating in the National Dialogue in order to de-escalate violence and find a peaceful solution to the current crisis,” Dujarric said.

More than two months of demonstrations demanding the resignation of Ortega have left over 260 people dead in the bloodiest protests since Nicaragua’s civil war drew to in an end in 1990, the Inter-American Commission on Human Rights (IACHR) confirmed in a statement Wednesday.

According to the NGO Nicaraguan Association for Human Rights (Anpdh), as many as 351 demonstrators have died, while at least 2,100 have been injured in the last three months.

During a meeting of the Organization of American States (OAS), Nicaraguan chancellor, Denis Moncada, explained that the large majority of these deaths have been a result of “terrorist attacks of internal and external political groups, which have been joined by transnational organized crime in order to carry out a coup d’etat and change the legitimate government of President Ortega.”

Since protests broke out in mid-April to contest social security reforms, the country has been thrust into unprecedented socio-political turmoil which has been commandeered by right-wing factions looking to oust left-leaning Ortega.

On July 2, the European Committee of Solidarity, along with the FSLN, released a statement denouncing the opposition’s interference in Nicaragua’s national peace dialogue.

Despite the raging violence, Vice President Rosario Murillo has continued to defend her husband’s legitimacy and reminding the public that the reigning Sandinista party movement has been subject to violent insurgents, attempting to overthrow past administrations.

“We are strong, indestructible… this will not happen,” Murillo said, alleging that “reconciliation” between parties is the only way to guarantee lasting peace.