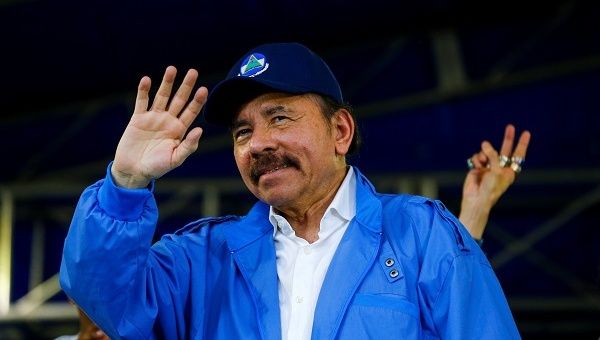 July 19 will be a categorical vindication of President Daniel Ortega’s Sandinista government’s efforts for peace in Nicaragua. | Photo: Reuters

July 19 will be a massive celebration of the coup’s defeat and a categorical vindication of President Daniel Ortega’s Sandinista government’s efforts for peace in Nicaragua.

July 17 (teleSUR) On July 19, hundreds of thousands of people from across Nicaragua will converge on the capital Managua to celebrate the 39th anniversary of their historic 1979 defeat of the Somoza dictatorship. The event takes place as the authorities continue to liberate communities blockaded by roadblocks operated by armed opposition activists whose not-so-soft coup attempt against the Sandinista government, begun on April 18, has failed. Ever since April 21, when President Daniel Ortega called for a process of National Dialogue to peacefully resolve opposition demands, Nicaragua’s political opposition and their allies have worked to sabotage talks for a negotiated solution. They have regularly staged extremely violent provocations falsely seeking to portray the government as being wholly responsible for the crisis and demanding President Ortega’s resignation. 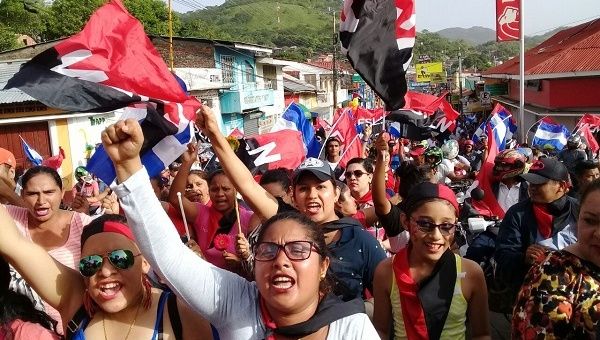 President Daniel Ortega addressed the assembled crowds of thousands of supporters on Friday and said: “We are here with open doors.”

Early in July, the opposition reneged on an agreement to dismantle the roadblocks their armed supporters have used since late April to try to destroy the country’s economy and intimidate the general population. On July 9, the government declared it would no longer permit the opposition to abuse the population’s basic rights to peace and security, stating: “Faced with the daily suffering imposed on Nicaragua’s families, who since April 18 have suffered violence from terrorists who have murdered, tortured and kidnapped hundreds of citizens, the same terrorists that have burned and destroyed hundreds of families’ homes, public buildings, small- and medium-sized businesses, such that the state is bound to act in accordance with the law to guarantee the right of its citizens to live in peace, with security and respect for the human rights enshrined in our political constitution, in the charters of international organizations and in human rights conventions.”

Subsequently, Nicaragua’s national police have worked with local communities around the country to clear the opposition roadblocks. In Jinotepe, they set free hundreds of trucks and their drivers held hostage by opposition gangs for over a month. In many places, it has been possible to negotiate agreements to remove the roadblocks peacefully. Elsewhere, the process has involved violence and casualties provoked by very well-armed activists and associated paid criminals resisting the authorities’ efforts to restore freedom of movement. On July 13 in Managua, two opposition activists were killed during the clearance of blockades in and around the National Autonomous University.

Elsewhere, on July 12, opposition activists from roadblocks operated by Francisca Ramirez and Medardo Mairena’s anti-Canal movement infiltrated an opposition peace march in the town of Morrito, on the eastern shore of Lake Nicaragua, on the highway to the Rio San Juan. They attacked a police post and the local municipal office, murdering four police officers and a primary school teacher, wounding four municipal workers and kidnapping nine police officers. Subsequently, that evening the police officers were set free, six of them with injuries.

In Masaya, opposition activists tortured, murdered and burned police officer Gabriel Vado Ruiz and would have done the same to another police officer, Rodrigo Barrios Flores, had he not escaped from his captors after enduring two days of torture and abuse. Although the extreme violence of the armed opposition activists has been responsible directly and indirectly for almost all the loss of life and injuries during the crisis, international news media and human rights organizations continue to falsely blame the government for virtually all the deaths and people injured. Amnesty International and fellow coup apologists such as Bianca Jagger and SOS Nicaragua, along with their allies in corporate media such as the Guardian, Telegraph, Washington Post, New York Times, Al Jazeera, CNN,  BBC, all cover up very serious human rights violations by the opposition activists during the failed attempted coup against Nicaragua’s legitimate government.

However, abundant audiovisual and photographic material exists providing irrefutable evidence of systematic human rights violations practiced by Nicaragua’s political opposition. From the the start, on April 18, the armed opposition offensive has manipulated legitimate peaceful protest so as to give cover to a very deliberate campaign of violence and deceit, promoting a climate of fear and casting blame on the government so as to create a psychosis of hatred, polarizing Nicaraguan society. The campaign’s objective is to make impossible a negotiated solution to the crisis provoked by the political opposition. Over the weekend of July 13-15, events in Nicaragua showed how refined the techniques of psychological warfare have become.

The political opposition have used social media to misrepresent and exaggerate events, create incidents that never happened and obliterate their own criminal terrorist attacks. For example, the crisis in Nicaragua began with a fake ‘student massacre’ that never took place. Now Nicaragua’s opposition have faked attacks on a church in Managua, exaggerated casualties during the clearance of opposition thugs from the national university and covered up their own deliberate murders of police in Morrito and Masaya, as well as their gratuitous attacks on peaceful Sandinista demonstrators. In the national university, the opposition gangs also set fire to a classroom module and destroyed a preschool facility on the university campus.

Right from the start of the crisis, the opposition have expertly staged phony scenes of students taking cover from gunfire and used those images to justify their own savage attacks, like those in which they burned down pro-government Nuevo Radio Ya and CARUNA, the rural cooperatives’ savings and loan institution. Photographs show opposition journalists and photographers filming opposition activists pretending to be attacked, but despite the obvious fakery, those false stories get published uncritically in international corporate and alternative media. Nicaragua provides a textbook case study bearing out the work of analysts such as Cuba’s Randy Falcon, who has emphasized how new technologies exponentially multiply the digital reproduction of longstanding conventional propaganda motifs.

In Nicaragua, the government has in several cases negotiated agreements to clear armed opposition roadblocks, only to find that the opposition refuse to honor the agreements. The extremist political opposition are desperate to keep up their violence so as to sabotage efforts at National Dialogue and project the false image of a repressive government without popular support. Large demonstrations across the country supporting the government’s efforts for peace show exactly the reverse is true. Majority national opinion in Nicaragua is well aware of the opposition’s propaganda ploys and false claims.

Within Nicaragua, the opposition hardly bother to conceal their invention and artifice because their false political theater is staged almost entirely to impress overseas opinion. Their sinister cynical theater aims to set the scene for the Organization of American States to change its previously moderate position on Nicaragua and give the U.S. government an institutional pretext on which to intensify sanctions against Nicaragua’s government and its people. Even so, despite probable opposition attempts to sabotage it, July 19 will be a massive celebration of the coup’s defeat and a categorical vindication of President Daniel Ortega’s Sandinista government’s efforts for peace in Nicaragua.