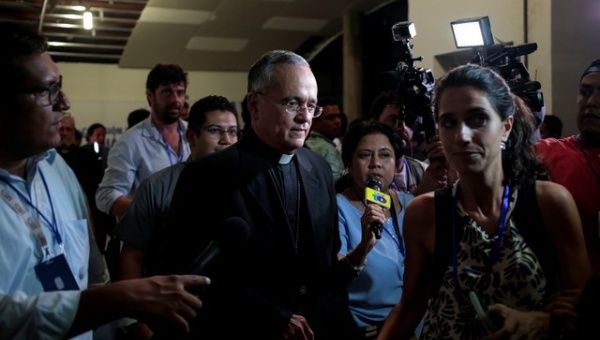 According to Raschke, the Catholic bishops who have been mediating the dialogue are not honest actors seeking “true dialogue.” | Photo: Reuters

According to the pastors, the Catholic Church needs to call on their priests to stop inciting people at the protests in Nicaragua.

“We need to reach an understanding, live together and search for the best in this, finish this government period, and if in the end, the people believe this government is worthless, well there is the vote,” Raschke said.

According to Raschke, the Catholic bishops who have been mediating dialogue between the government and the opposition are not honest actors seeking “true dialogue.”

“I haven’t heard them call for peace, asking their followers to refrain from participating in these type of activities(violent protests)… To the bishops I would say to have the morality to direct a national dialogue, order those priests, that I have seen with white robes inciting the people in demonstrations, to remove themselves,” Raschke said.

On Thursday, president Ortega met with the Catholic bishops, who handed him a proposal to “democratize” the country and stop the spiraling violence. The contents of the document remain unknown, but Reschke believes that one item was related to the opposition demand that Ortega steps down before finishing his presidential term in 2021.

The government has rejected that demand saying it amounted to a coup.

The opposition and the United States blamed government repression for the failure of the talks, ignoring overwhelming evidence of protesters committing acts of arson on public buildings, attacks on government workers and attacks on ruling party supporters.

Pastor Reschke said he spoke with president Ortega and asked him to ask forgiveness for the mistakes made during the protests to begin a process of “reconciliation and humility.”

According to Raschke, during the meeting, the president told him he felt deep sorrow for what is happening in the country and that he had ordered the police to stay in their barracks.

The evangelical leader also announced he would meet with the president again Monday.

The Nicaraguan political crisis began in mid-April with protests against social security reforms that President Ortega later withdrew in order to avoid an escalation in violence.