Posted on November 8, 2018 by Anthony Brenner 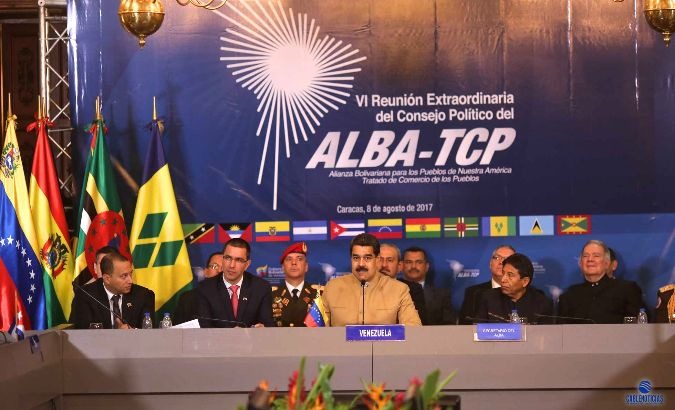 The ALBA meeting will also address themes referring to the ‘Sucre’, which is a regional currency proposed for international trade among the Alliance members.

Nov 7 (teleSUR) Foreign ministers of the member countries of the Bolivarian Alliance for the Peoples of America (ALBA) are scheduled to attend the 17th Ordinary Meeting of the Political Council of the body Thursday, in Managua, Nicaragua, to discuss an agenda of political and socio-economic issues.

“There is a complete agenda to see the analysis, the political issues, the socio-economic issues, all the complementary programs and projects that we have been and will be developing,” Nicaraguan Vice President Rosario Murillo stated.

ALBA was founded in 2004 by Cuba and Venezuela as a progressive alternative to the United States-driven Free Trade Agreement of the Americas (FTAA). The Bolivarian Allianceincludes Venezuela, Cuba, Bolivia, Nicaragua, Dominica, Saint Vincent and the Grenadines, Antigua and Barbuda, Saint Lucia, Saint Kitts and Nevis, Grenada and Suriname.

Murillo indicated that country representatives will discuss issues related to the ALBA Bank (Banalba), a financial integration initiative which encompasses Venezuela, Cuba, Bolivia, Nicaragua, Saint Vincent and the Grenadines, and Dominica. The ALBA meeting will also address themes referring to the ‘Sucre’, which is a regional currency proposed for international trade among the Alliance members.

The minister and vice minister of foreign affairs of Venezuela, Jorge Arreaza and Alexander Yañez; the vice chancellor of Cuba, Abelardo Moreno; and the vice chancellor of El Salvador, Carlos Castaneda are scheduled to attend the meeting. Delegations from Antigua and Barbuda, Bolivia, Dominica, Grenada, Haiti, Saint Kitts and Nevis, Saint Vincent and the Grenadines, and Suriname will also be present at the high-level encounter.

Likewise, the vice minister of Venezuela for the Caribbean, Raul Licausi; and the Banalba President Ramon Gordils are also expected to participate.

Nicaragua will be represented by its Foreign Minister Denis Moncada; vice chancellor and minister for the Caribbean, Valdrack Jaentschke; advisory minister of the presidency, Sidhartha Marín; the deputy minister of foreign affairs, Arlette Marenco; and Deputy Minister Ivan Lara.

The general secretary of ALBA, David Choquehuaca, has been in Nicaragua since last Monday and has already met with representatives of the executive and legislative.

On the opening day of the ALBA meeting, the Venezuelan Consortium of Aeronautical Industries and Air Services (Conviasa) will inaugurate a new air route between Caracas and Managua.

“The first flight of Conviasa, from Caracas to Managua, will be arriving precisely with the ALBA delegations,” Murillo announced.