New Group Enjoys Thaw in U.S.-Cuba Relations With a Party 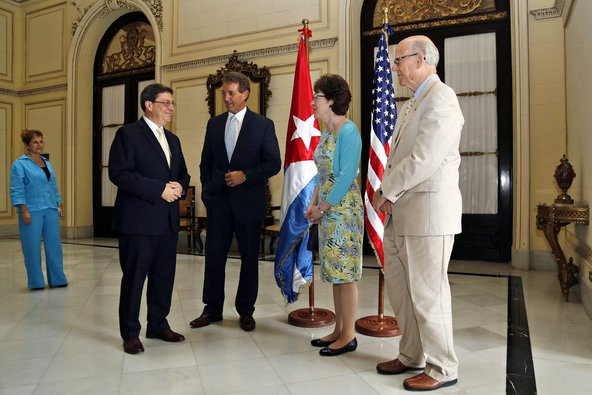 The American travel and trade bans against Cuba are older than the 52-year-old senator Jeff Flake – “so yesterday,” he likes to chide his younger Senate colleague Marco Rubio, who opposes ending the bans yet campaigns for president as a new-generation candidate declaring, “Yesterday is over!”

Mr. Flake, a Republican from Arizona, related the story as he and several other lawmakers and American and Cuban diplomats joined Tuesday night at the packed Washington bar, Partisan – invitations added the prefix “Bi” — to celebrate Engage Cuba, a newly formed group pushing for an end to the bans. Attendees partied like it was 1959 as wine and dark rum drinks – Cuba Libre and Havana Nueva cocktails – flowed.

Among them were lawmakers who, like Mr. Flake, were working to end the Cold War-era embargo against Cuba even before the Obama administration late last year opened negotiations with the Communist nation. But unlike Mr. Flake, most were Democrats, and it is Republicans in the Republican-led Congress who likely will prevent the bans from falling any time soon. Even so, the bipartisan leadership of Engage Cuba includes Steven Law, the chief executive of the Republican fund-raising organization American Crossroads and former chief of staff to the Senate majority leader Mitch McConnell of Kentucky, along with Luke Albee, a former chief of staff to the Democratic senators Patrick Leahy of Vermont and Mark Warner of Virginia, who were there, too.

Mr. Flake, ever optimistic, told the group, “To see where we are today is really heartening.”

Just back from yet another trip to Cuba, he added: “Let me tell you – the feeling I had the last couple of visits to Cuba is that the reforms – I didn’t feel this way for a long time – that the reforms that have been made are irreversible. It’s full steam ahead.”

Being from Arizona, Mr. Flake said he is asked all the time why is so involved in the issue. “And,” he said, “I tell people I polled Cuban-Americans in my state what I should do, and both of them said, ‘Just move right ahead, we like what you’re doing.’”

More seriously, though, Mr. Flake said: “It’s an issue of freedom. Americans should be able to travel wherever they want, unless there’s a compelling national security reason.”