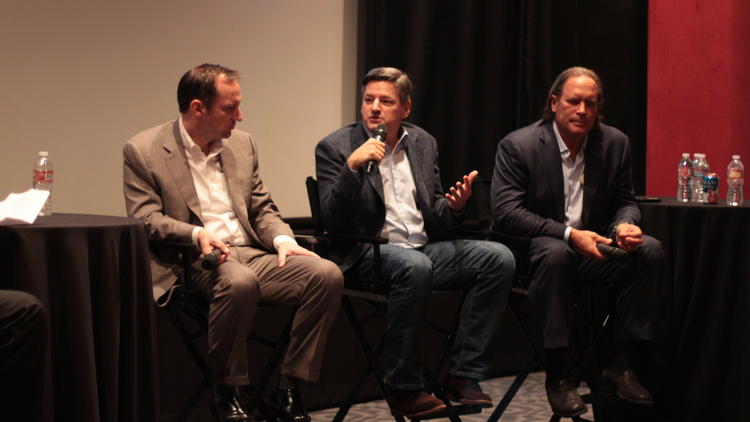 A long-term strategy in today’s television landscape would appear futile given the accelerated pace of change.

But for Netflix Chief Content Officer Ted Sarandos, the key is simple: “get more global.”

Sarandos — along with Steve Mosko (Sony Pictures Television) and Ed Carroll (AMC Networks) — spoke Monday evening at a panel titled “The New Era of TV” by Chapman University’s Dodge College of Film and Media Art that took place on the Sony Pictures lot in Culver City. And his point came fresh off Netflix’s head-scratching announcement earlier in the day that it would become available in Cuba.

“Now they just have to get the Internet,” Sarandos deadpanned, referring to the island nation’s low Internet saturation.

“Our goal by the end of 2016 is that we want to be a completely global product,” Sarandos told the crowd of students.

Netflix made headlines last week when it announced that it was expanding to Japan this fall. It previously said it will launch in Australia and New Zealand next month. In September, it premiered in six European countries, including France and Germany.

Sarandos, in talking of Netflix’s global imprint, spoke of the company’s interest in doing local-language products — pointing to productions it has started in Mexico and France.

“We’re trying to figure out what the role of local language programming is on our services around the country that make a service that’s a very global product feel local,” he said.

“I’m organizing my entire organization as global buyers now, instead of regional buyers,” he said. “We used to have teams of Latin American buyers and European buyers, Asian buyers.”

Other takeaways from the panel:

Will we reach a saturation point when it comes to the number of platforms offering programming? Not according to Sarandos: “I don’t think there’s a saturation point. I never once heard anybody complain that there were too many great restaurants to go to. Everyone just has to find their favorite.”

What’s the biggest change coming to TV? Mosko, president of Sony Pictures Television, thinks it’s already happened. “I think the entertainment industry will be driven by the television business, not the movie business … I think the motion picture business is still a great business, but there is just so much television being produced, and so much good television. Maybe it’s just equal footing.”

There’s no longer a time to wait. Carroll, who oversees all operations of AMC Networks’ brands, said it’s a creators’ landscape. “We feel the competition … someone walks in a room–where you used to be able to find a script that you thought would be great and you could sit on that for a couple of days– a week, a month–have other people read it and think about it,” he said. “If you love something now, you really feel the pressure–it’s palpable to ‘buy in the room.'”

I tweet about TV (and other things) here: @villarrealy