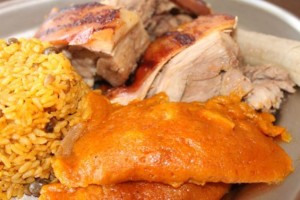 Havana, Dec 24 (EFE).- At the close of a year marked by the reestablishment of relations with Washington, Cubans are celebrating the Christmas holidays without big parties but the private restaurants known as “paladares” are causing family traditions to evolve and many people are trying out their culinary offerings.

Since 1997, when Christmas was reinstated as a holiday on the communist island – after decades of not being celebrated – the traditional family dinner has been recovering and becoming a more prominent custom that now, with the continuing rise of private businesses, is enjoying a new heyday.

The Christmas offerings “have improved a lot since the paladares appeared,” Yasiel, a young doctor who said that for the past few years he hasn’t eaten at home for the holidays, told EFE.

There are about 2,700 paladares on the island, and they have become one of the most dynamic and innovative businesses in the budding private sector, one of the foundation stones for the reforms pushed by President Raul Castro since 2011 to update the socialist model.

The Web page Alamesa, with an app and a weekly bulletin, is one of the most frequently-consulted online sites by Cubans wanting to learn about the latest culinary opportunities, and it has been accessed at a frantic pace in recent weeks as people look for special Christmas deals.

“This year we’ve set records both in demand for information by consumers and in offerings by private businesses,” Alamesa founder Ariel Causa told EFE, adding that the several people who keep the Web site up and running are having a lot of work this holiday season.

Although celebrating Christmas was suspended on the island in 1969, it was reinstated a month prior to the historic 1997 visit by Pope John Paul II to Cuba. Nevertheless, many families continued to celebrate it discretely during the time it was officially banned. EFE