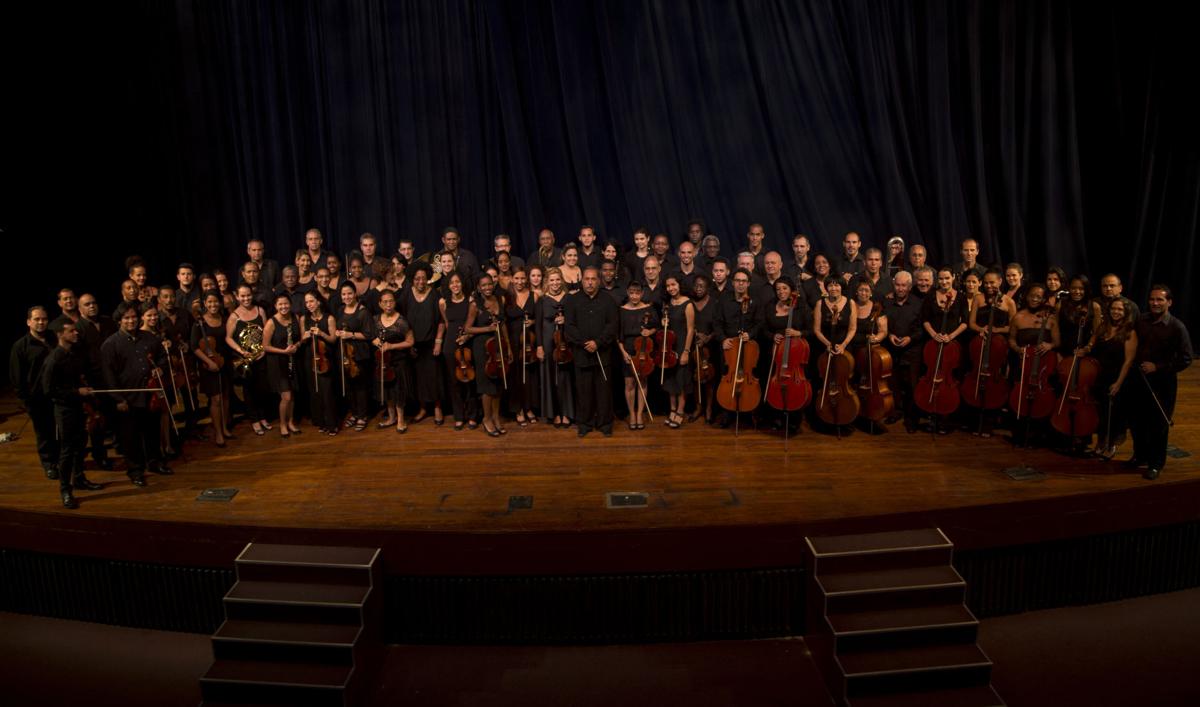 The National Symphony Orchestra of Cuba poses on stage during its 2018 tour. Courtesy of Erik Baxter

On Tuesday night, the National Symphony Orchestra of Cuba took the stage in Eisenhower Auditorium.

“The Cuban people have maintained a vibrant and rich culture with strong performing arts companies and artists,” Trudeau said.

The orchestra was founded in 1959, and performed its first concert in November of 1960, according to the program from the performance.

“Since its creation the Orchestra has worked to disseminate Cuban and Latin American music as well as to cover a vast symphonic and chamber repertoire that ranges from baroque to modern,” the program reads.

Since its debut, the orchestra has performed 3,000 concerts worldwide, according to Trudeau. It has been directed by over 100 conductors, including the current conductor Enrique Pérez Mesa.

Mesa, an internationally renowned conductor and musician, has led the orchestra in performances all over the world. He has also collaborated with several well-known soloists like Francesco Manara and Alessandra Ferri, according to the program.

“His DVD recording with Cuban Pianist Frank Fernández was nominated for the Cubadisco in 2008,” the program reads.

Sunwoo, 28, was born in Anyang, South Korea and began playing piano at 8 years old. He moved to the United States in 2005 to receive his bachelor’s degree at the Curtis Institute of Music, and would later receive his master’s from Julliard, according to the program.

“A strong factor in our decision [to host the orchestra] was that the 2017 Gold medal winner of the Van Cliburn International Piano Competition would be the soloist,” Trudeau said. “We were thrilled that the winner is Yekwon Sunwoo, a fabulous and exciting artist.”

Now, Sunwoo tours around different countries including Germany, South Korea, Spain and Sweden. He has also appeared as a soloist in other national orchestras such as the Juilliard Orchestra.

The performance consisted of 4 long-form pieces; “The Three Cornered Hat, Suite 1,” Rhapsody on a Theme of Paganini,” “Symphony No. 9” and “Guaguancó”

Trudeau said that the Center for the Performing Arts hosts at least one performance by an orchestra per season.

“It offers student and our community the chance to hear outstanding orchestras from around the world,” he said. “We have enjoyed many great performances by orchestras from Europe, Russia and South America in programs that have featured talented soloists.”

The program for this one was especially wonderful, offering a lot of variety and including a work by a Cuban composer, according to Trudeau.

“This is a tribute to the Cuban people,” he said, “and it demonstrates how they value the arts in their country.”