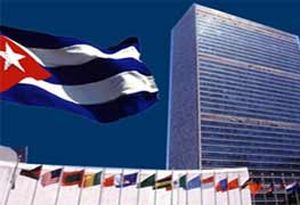 According to the Cuban Permanent Mission at the United Nations, the representation delivered here to NAM, comprised of 120 countries, the accusation that reflects recent plans financed by USAID (United States Agency for International Development), aimed at promoting internal subversion.

The Cuban Mission at the UN recalled at a press release that Washington’s destabilizing plans violate the Non-Aligned principles, particularly the respect to the States’ sovereignty and the non-interference in internal affairs.