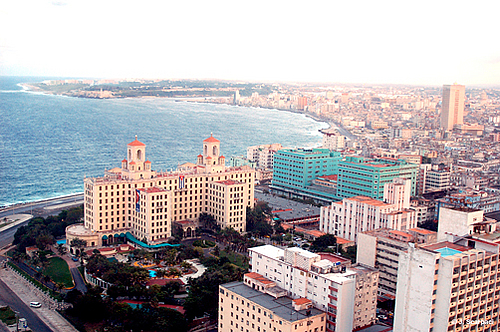 Miami-based International Port Corp. announced on Tuesday the Oct. 1 launch of a prepaid card for use by Americans visiting Cuba.

Dubbed “Club Malecon,” the instant issue prepaid card will be accepted at ATMs, Cuban money exchange stores (CADECA), and all accepting point-of-sale merchants throughout the island nation. Oct. 1 is the pre-sale date for the card, and once card applications are approved, they will be issued and shipped.

Miami-based Aegis FinServ Corp. launched a prepaid card in partnership with MasterCard in 2012, that is available to Americans and citizens of other countries. The Aegis card works as both a credit and debit card, is Cuba-enabled, and has a maximum load of up to $100,000.

IPC president and founder Larry Nussbaum said he created the card with the intention of filling a hole for visitors who don’t have a Cuba-ready credit or debit card. Despite the continued opening of U.S.-Cuba relations, there are still many roadblocks in the way to easy financial navigation of the island nation for Americans.

“ It’s a very unique and special product that we’ve been negotiating for a very long time to get these features approved with the Cuban banking authorities,” Nussbaum said.

Cash has long been king for U.S. visitors to Cuba traveling under one of the 12 allowed categories, and although U.S. banks are permitted by the U.S. government to issue Cuba-ready credit and debit cards, only one has taken that step so far. Pompano Beach-based Stonegate Bank launched a Cuba-ready debit card late last year and a similar credit card this year.

Nussbaum’s Club Malecon prepaid card is designed for American travelers who want easy financial security during their visits to Cuba. The card has no minimum deposit requirement, a limit of $10,000, and complies with the Cuban banking and security laws.

There is a one-time $10 purchase fee which is deducted from the first time the card is loaded, a 6 percent service fee to process credit card and debit card transitions, as well as a 3 percent services fee for currency exchange. The cards can also be loaded with PayPal transfers.

The card is nontransferable and there is a name and pin number associated with each card because the card has to comply with know-your-customer laws.

The name for the card is very Cuban in and of itself — in Havana, the city begins at the Malecón. The avenue along the seawall is an iconic scene where many different people from across Havana, Cuba and the world come and mix.

“We wanted to find something that, one, identified the card with Cuba and this was one of the historic places in Havana that everyone who goes there knows about,” he added.

The card can either be mailed to a user or picked up in the future at Cuba.

Nussbaum’s IPC venture is the first U.S. company to have a legal office on Cuba, according to Nussbaum. IPC is a logistics retail business that sells products to those operating on Cuba for legal reasons, like embassies. Ambassadors can order items from IPC like office supplies, mattresses and televisions.

Eventually, there will be a rewards and loyalty program for users between IPC and Club Malecon, hence the “Club,” Nussbaum said.