Mexico: ‘We Will Not Break Diplomatic Relations with Venezuela’ 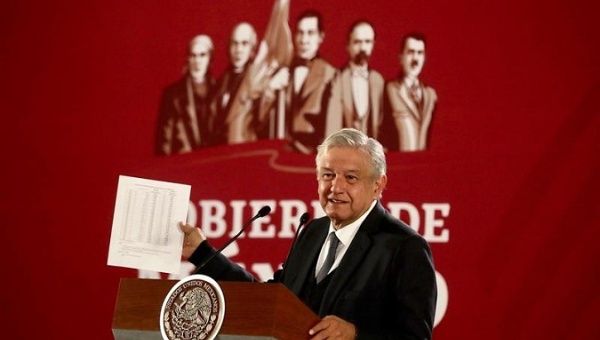 A Mexico government official reiterated they will uphold a policy of non-intervention.

During a Lima Group meeting held Wednesday in Bogota, Colombia, the

Mexican government of President Andres Manuel Lopez Obrador ratified they will respect every nation’s sovereignty and maintain a policy of non-interference.

“Self-determination of peoples, peaceful resolution of disputes, non-intervention, international cooperation and respect, protection and promotion of human rights in our Latin America and the Caribbean,” Maximiliano Reyes Zuñiga, Under Secretary for Latin America of the government of Mexico said Wednesday via Twitter.

On Facebook he published a similar comment, specifying “We reiterate that we are not going to break diplomatic relations with Venezuela.”

The statement comes amid a new attempt by the Lima Group to undermine the Venezuelan government by supporting United States-led economic sanctions and refusing to recognize President Nicolas Maduro’s electoral victory this past May.

Anti-Venezuela actions are primarily promoted by the right-wing governments of Argentina, Brazil, Chile, Colombia, and Peru.

Lopez Obrador, who assumed the office of the presidency on Dec. 1, vowed a return to a non-interventionist foreign policy. Despite international attempts to isolate Venezuela, the newly-elected president decided to invite President Maduro to his swearing-in ceremony and has been critical of media coverage against Venezuela.

Mexico is an important economic and political player in Latin America, losing its support in the anti-Venezuela campaign will undermine attempts to isolate the government of Nicolas Maduro.