Posted on November 1, 2014 by Anthony Brenner 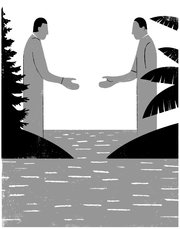 From the New York Times:

Your three editorials about Cuba this month are a welcome acknowledgment that the embargo is a fossilized Cold War fiasco (“The Shifting Politics of Cuba Policy,” “Cuba’s Impressive Role on Ebola,” “The Moment to Restore Ties to Cuba”). The United States is losing opportunity and credibility by maintaining it against universal condemnation.

Recognition of Cuba’s response to the Ebola crisis and to other humanitarian crises over the years, its commitment to health care, and the shift in generational attitudes toward the embargo is long overdue. These editorials should help politicians understand that they no longer have to fear following common sense on Cuba.

While Congress is tied up in a partisan straitjacket, it is unlikely to move soon toward relations with Cuba worthy of the 21st century.

A significant step could be taken by engaging in serious dialogue to secure the release of a United States Agency for International Development employee, Alan Gross, jailed in Cuba since 2009, and three Cubans, jailed in the United States for the past 15 years.

Both governments claim that these men violated their laws. Both governments insist on release of their citizens as a demonstration of good faith. Serious humanitarian reasons support their release. Once they are free, their respective governments can talk about commerce, education, health and human rights. We all stand to benefit.

The writer served as an appellate attorney for the jailed Cubans.

Bravo to The New York Times for a third editorial on Cuba policy this month. As a former congressional staffer, I had the privilege of visiting Cuba on a fact-finding mission in June. Our group visited Cubans in their homes and workplaces and saw firsthand how the economic reforms are improving the lives of many Cuban women and their families.

And while the pace of the Cuban government reforms is slow, and in some cases incomplete, nearly every legislator, educator, doctor and entrepreneur we met was keen to engage with the United States. Like Americans, Cubans strive to make a decent living, get a good quality education and support a family. Yet our archaic and ineffective policy toward our neighbor counteracts those aspirations.

A new direction with Cuba can be a major foreign policy achievement for President Obama, the people of our two countries and the hemisphere.

The writer was legislative director for Representative Barbara Lee, Democrat of California.

I fully support your recent calls for changing our Cuba policy. The road to normalization will face many obstacles, and one thing we must do to succeed is to approach the Cubans with far more respect than in the past.

Cuba has an understandable siege mentality after decades in which the most powerful country in the world has tried to bully it and impose regime change. It is time that we abandon these attitudes, which hark back to pre-1959, when Cuba was our client state. We can engage Cuba with respect as a sovereign country, which would still allow us to raise our concerns, much as Canada, the European Union and all of Latin America have done successfully for decades. We will get a lot more accomplished that way.

Your editorials make a very good case for restoring diplomatic ties between the two countries. Yet they don’t mention an important consideration: Guantánamo Bay. One must consider what to do about the detention center in particular and the naval base in general.

Cuba regards the American presence in Guantánamo Bay as illegal and a violation of international law. It’s foolhardy to think that the United States can restore diplomatic relations without placing Guantánamo Bay on the negotiating table.