Meet Gloria Rolando, on tour with her new film ‘Reembarque’ on Haitian farmworkers in Cuba before the Revolution 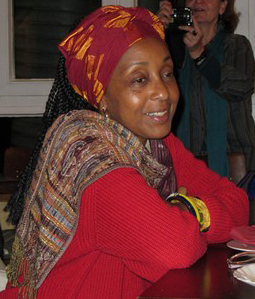 Gloria Rolando is a legendary Afro-Cuban filmmaker who is currently on tour in the U.S. showing her new film, “Reembarque,” a documentary about the discrimination suffered by Haitian agricultural workers in Cuba before the Revolution.

Rolando is also responsible for the monumental documentary, “Eyes of the Rainbow” about the life and African spirituality of Black Panther and Black Liberation Army exile Assata Shakur, on whose head the U.S. government placed a $2 million bounty.

It is important that we view, analyze and support the work of this internationally acclaimed Afro-Cuban conscious filmmaker. She has eyes and ears outside the reach of the Western dominated media oligarchies. She can teach us about a world outside of American influence. Check her out in her own words as she talks about her film projects and becoming a filmmaker …

M.O.I. JR: Our guest today is the legendary Cuban filmmaker who is currently on tour showing a new documentary regarding the relationship between Cuban and Haitian people, which we will get into in more detail. She is also here raising money for a new film that she has in the works. I’m talking about none other but the legendary Ms. Gloria Rolando. How are you?

M.O.I. JR: I’m good, I’m good. I’m glad to have you all the way from Cuba here on tour in the Bay Area. Your film is showing at the Eastside Arts Alliance this Friday. It is on 23rd and International. It starts at 6 p.m. in Oakland. Ms. Gloria Rolando, can you tell the people a little about this film that you’ll be showing?

Gloria Rolando: The title of this documentary is “Reembarque,” and it’s dedicated to the presence of the Haitians in Cuba who arrived at the beginning of the 20th century. They arrived in Cuba because it was a big business to bring a cheap labor force for Cuban industry, and the Haitians were producing for the big Cuban industries at that time.

They suffered a lot of exploitation and discrimination, but in time they were told we don’t need them anymore. Because of the crisis of the Cuban economy after the first World War, they decided that they don’t need them and so they sent them back to Haiti.

It’s a chapter in human history that is not really well known, but it’s in the memory of many Haitians who were children at that time and they don’t know what happened with their relatives. So it’s time to remember the chapter and to interview the people before we lose this kind of memory of the exploitation and discrimination against people who migrate to another country. It’s a topic that’s important to us. I’m talking about the past and also about the present. 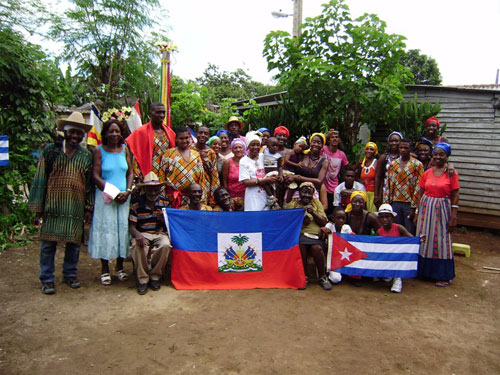 In “Reembarque,” these descendants of Haitians gather in Camagüey, Cuba.

Gloria Rolando: I talk about the past; it’s something that happened a long time ago: 1921, 1937. But after many Haitians went to Cuba in the ‘40s and the ‘50s, now they’re a part of Cuba. They have the same rights and their children have the same rights. So for us it’s not something rare in the Eastern part of the island to find the Haitian descendants.

So when we talk about Afro-Cuban culture, we need to consider the presence of the West Indian people that came from Jamaica, Barbados etc. and also those people that arrived from Haiti at the same. Their way of life, their Vodun, their dances, their kinds of food – it is still alive. They keep it alive.

M.O.I. JR: Well, Ms. Gloria Rolando, I became aware of you when you did the film “Eyes of the Rainbow” about a decade or so or even more, a decade and a half ago. How did you become a filmmaker?

Gloria Rolando: Well, I never studied filming. I finished art history in 1976 at the University of Havana and they needed some graduate students to work in research for a feature film or documentary. So they collected the best students that they had at that moment.

M.O.I. JR: Well, what was the process of becoming a filmmaker in Cuba if you never went to film school? Did they just put a camera in your hand and you made it happen and learned it?

Gloria Rolando: No, no, no, you have to be an artist; it’s a different method now. They teach you the camera, sound, editing. In my case, it was different. It was research, it was administrative work on the film as a producer, but I’d never deal with the technology.

But now in film school of course they teach you how to do all of the different processes – even if you decide at the end I want the position of a director or I want to be a specialist in sound. Now it’s different. They have to teach you everything.

M.O.I. JR: Can you talk a little bit about one of your films that definitely was groundbreaking in the United States, about the revolutionary Black Panther Cuban exile Assata Shakur? How did the film “Eyes of the Rainbow” come about?

Gloria Rolando: I made this film because I met Assata a long time ago in Cuba and little by little with my independent video group we were able to interview her, to include also the Orisha songs because she talks in her interview about how to get in touch with African religion, with African tradition in Cuba.

So that allowed me the possibility to integrate the Afro-Cuban belief systems – for instance, the Orisha, the deity that deals with justice. So I used music to function as the narration for the film.

Oya is the owner of the rainbow and the owner of life. So I made a mixed combination between Assata’s personal history and integrated the Afro-Cuban culture. It was not so bad for me because she picked the topic of this, and I have to shoot everything in Cuba, so we worked out an aesthetic solution.

M.O.I. JR: Well, Ms. Gloria Rolando, I want to thank you for your time. But before you go, how can people get in touch with you online if they would like to keep up with your filmmaking?

Gloria Rolando: There is a website that is called AfroCubaWeb.com. That’s how people can get in touch with all my work and information, even the rest of my tour, because I will remain in the United States until Dec. 4.

From here in San Francisco I will go to Spellman College, and at the end of this tour in November I will be in New York at the International African Film Festival. There I am going to show “Reembarque” and also “1912: Breaking the Silence,” a trilogy that I made about the only Black political party that ever existed in Cuba and finished dramatically in 1912 with a massacre of about 3,000 Africans.

This trilogy people can get through AfroCubaWeb.com. They are promoting it; they are selling it. They can get copies on disc for those who want to know the history of the independent party of color in Cuba.

M.O.I. JR: Well, thank you, ma’am, for your time and for giving us eyes outside of the borders of the United States and exposing us to your work.

Hands off Cuba! We’re against the sanctions. And we appreciate you!

Gloria Rolando: I hope to see you in Cuba soon. Thank you.