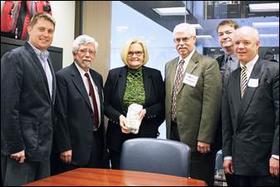 If U.S. Sen. Claire McCaskill, D-Mo., and Gov. Jay Nixon get their way, Cubans will soon be dining on Missouri-grown rice, corn, pork, poultry and soy products while driving pickup trucks manufactured in the state. The two are aggressively pushing to open Cuba to trade following President Barack Obama’s announcement that the United States will normalize diplomatic relations with Cuba.

As Congress leaves Washington for a week-long break, McCaskill and two other U.S. senators are heading to Cuba for four days of meetings with government officials, citizens and small business owners.

“We certainly can compete with any of the countries that are currently providing commodities to Cuba, particularly our rice,” McCaskill told St. Louis Public Radio Thursday. “We’re right on the Mississippi, we can put it on a barge, and it can almost be in Cuba by nightfall.”

For McCaskill, the trip has two primary objectives.  “I’m hoping that I will be able to determine what, if any, barriers remain and then share that with our commodity producers in Missouri, who are all going down (to Cuba) in March,” McCaskill said.

For her part, McCaskill has spent much of the last week doing her homework and reaching out to the state’s agricultural interests ahead of her trip.

“I’ve got a big briefing book and I’ve begun to slog through it.”  McCaskill said.  She also met Thursday with the chief of the Cuban Interest Section, Dr. Jose Ramon Cabanas Rodriquez, in Washington.

While the U.S. and Cuba do not yet have full diplomatic relations, they do host so-called Interest Sections in each other’s capital. The offices handle many of the same functions as embassies but lack the full legal distinctions and recognition that embassies enjoy.

Besides promoting Missouri agricultural products to government officials, McCaskill and the other senators are scheduled to meet with Cuban citizens and small business owners “and talk privately about what life is like for them. The entrepreneurs are trying to make their way through a very difficult regime in terms of being able to get out from underneath government control.”

On Capitol Hill, McCaskill has a reputation of asking direct, sometimes pointed questions of federal officials and witnesses who appear before Senate committees.  While she says that she does have some “probing questions” to ask that “might be a little uncomfortable” for individuals in Cuba, she says she also plans to “keep in mind that I’m a guest of Cuba, but I’m representing America. So, I want to be polite and show them that we have good manners” she says, with a laugh.

McCaskill says she wants to know “how isolated” Cubans are from each other and the rest of the world.  “Why is the internet not as robust in Cuba as it should be?  Is that because (of) the ability to control what citizens learn, or is it a technical problem or a lack of capability on their part?”

The trip is being organized by the Centers for Democracy in the Americas, but McCaskill says she and her husband, who will be joining her on the trip, are paying their own way.

The group is among only a handful of lawmakers to visit Cuba since the president announced his new policy. McCaskill is scheduled to return to the United States on Tuesday.