CUBA STANDARD — The administrators of the Mariel Special Development Zone (ZEDM) are working closely with foreign investors on 15 project applications, the ZEDM chief executive said during a fair in Havana, according to official media.

Ana Teresa Igarza didn’t specify the investors, but she said they hailed from Spain, Russia, Italy, China and Brazil, and that they involve “traditional industries,” food production and biotechnology.

She added that investors’ feasibility studies are “maturing,” that she expects some of their applications to be ready by the end of June, and that some could start operating at Mariel as early as the second half of this year.

“They’re quite advanced, there are approximately 15 that we continuously and closely work with, with the objective of them presenting the documents as soon as possible,” Igarza told journalists after a presentation on Mariel at the annual construction industry fair (FECONS) in Havana, according to official website Cubadebate.

In March, official business weekly Opciones quoted Igarza saying that as of the end of January, her office received 138 requests, including 66 requests for information and 72 applications for projects. Thirty-five projects were pre-approved, 17 were under consideration, and 20 were declined, she said at the time.

Not all foreign applicants are content with the Mariel Zone administration. The Cuba representative of a multinational interested in establishing a small service center at Mariel told Cuba Standard his company’s proposal was rejected in a meeting with ZEDM officials. The rejection left him puzzled. 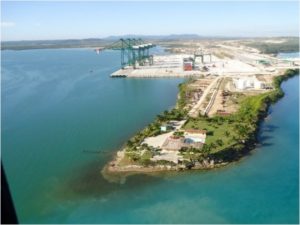 The heart of the Mariel Zone is a Brazilian-built container terminal. Photo: ZEDM

“What do they expect? Do they think companies will come and plunk down $50 million right away?” he said, adding that he will now “wait and see.”

Even so, the fact that an investor received an official rejection is news in itself and an indication that new rules are in force. In the past, foreign investors often went through endless negotiations, only to never receive an official response.

The only publicly announced commitment at Mariel, so far, is that of a Brazilian biotechnology company affiliated with Grupo Odebrecht, which said in January it would open a joint venture with Cuban state company BioCubaFarma to produce monoclonal antibodies for a cancer vaccine. Grupo Souza Cruz, a Brazilian subsidiary of British American Tobacco, said at the time it was considering opening a tobacco manufacturing facility for its Brascuba joint venture at the Special Development Zone.

In March, executives of 31 Brazilian companies were in Cuba to explore options of opening shop at Mariel. According to a March press release by Brazilian export agency Apex, the Cuban government has lined up Mariel-centered delegations from China, Spain, France, Russia and Vietnam, beginning in June.

In other Mariel news this week, the government published regulations regarding environmental liabilities of companies operating in the Mariel Zone operations; the main body of regulations came out in November.

Cuba is dashing ahead with the ambitious Mariel Zone project as the prime showcase of a renewed effort to lure foreign investment to the island. As GDP growth continues at a lackluster pace three years into economic reforms, the government is seeking to catch up by seeking investment abroad. Anchored by a Brazilian-built container terminal, the 180-square mile Mariel Zone recently got a $290 million loan from Brazilian development bank BNDES for infrastructure construction. Reflecting a new foreign investment law passed by the parliament last week, the Mariel Zone provides investors tax and tariff breaks, as well as the option of 100-percent foreign ownership.