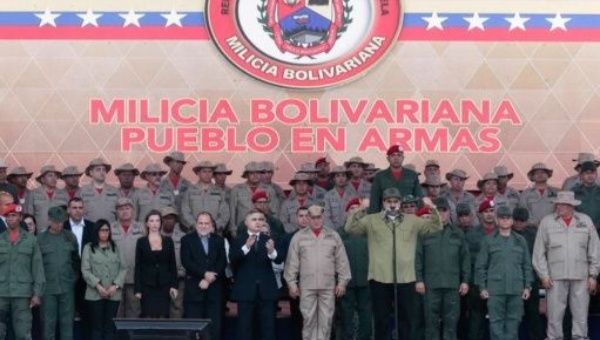 Maduro reported that the militia now accounted for 1,6 million citizens across the territory.

Dec 17 (teleSUR) During a public act celebrating the Bolivarian Militia, Venezuelan President Nicolas Madora called on people to stay alert before the danger of imperialism.

He recalled that the national militia was a task that “Commandant Chavez left us.” ” We must set up a perfect plan so these militiamen have their permanent preparation and know how to realize their mission at the moment they will be called for the fight.”

Maduro urged every other component of the Armed Forces to defend the sovereignty and the independence of the country against the “traitors who sell their souls for a handful of dirty dollars.”

“They can’t deal with us, imperialists, oligarchs and traitors, here the people shall triumph!” said the president, also calling for the defense of public services, as they have been targeted by opposition sabotage in a bid to destabilize the national government. “Watch out for any kind of paramilitary group,” added Maduro.

“Our homeland has a beautiful history since the resistance of our native peoples. This history is recorded in the generation of liberators of Venezuela and America,” he said.