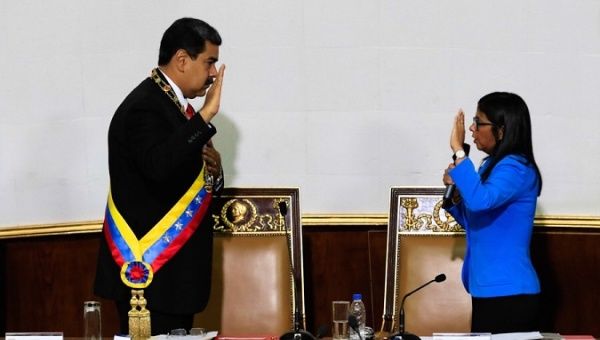 The ceremony took place at the headquarters of the National Constituent Assembly.

May 24 (teleSUR) Venezuelan President Nicolas Maduro took an oath that he would fulfill his duties to the constitution and carry out changes for peace and prosperity of Venezuela. after he won the May 20 elections with a wide margin with 68 percent of the vote.

The ceremony took place at the headquarters of the National Constituent Assembly, or ANC, where its president Delcy Rodriguez approved a decree ratifying that Maduro had been re-elected and would assume his new period on Jan 10.

After taking the oath, President Maduro addressed the crowad at the ANC where he thanked and welcomed all of those attending and the Venezuelan people for trusting him to lead the nation for another term.

“We can now acknowledge the full success of Venezuelan elections. We have seen every candidate appointed in a just election, come here to pay tribute to the National Constituent Assembly,” the president said after taking the oath. “It was the ANC who, since August 4, 2017, understood and assumed the need to electorally renew the municipal and regional authorities of the central executive power of the country.” 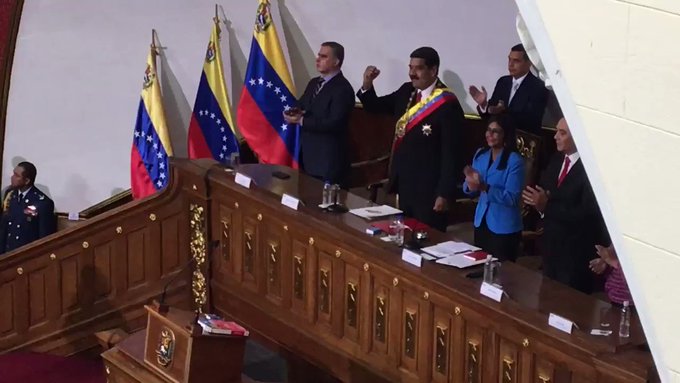 President Nicolas Maduro has sworn before the Constituent Assembly to fulfill his duties as President of Venezuela 2019-2025. @telesurenglish

He further assured that peace must be social, political and constituent … that is why we called for elections and gave the people the power to make their decisions.”

“In Venezuela there is a revolution in the Constituent, channeling the forces of the nation in a peaceful and democratic way, always betting on peace.” Venezuela has had free, fair and legitimate elections,” Maduro further stressed adding “that is why I have come to deliver my credentials emanating from the power of the people.”

He slammed the United States and its allies over attacking his government. “Never in the history of Venezuela has there been a president persecuted by the empire as much as I have been. Not even Chávez. Why is this happening us to us? Because we’re loyal!”

Maduro was elected for a second presidential term on May 20 winning 68 percent of the popular vote. While many heads of states in Latin America and the world congratulated the president, the United States and its regional right-wing allies chose to not recognize the results of the elections, with some governments refusing to acknowledge the election before it even started.