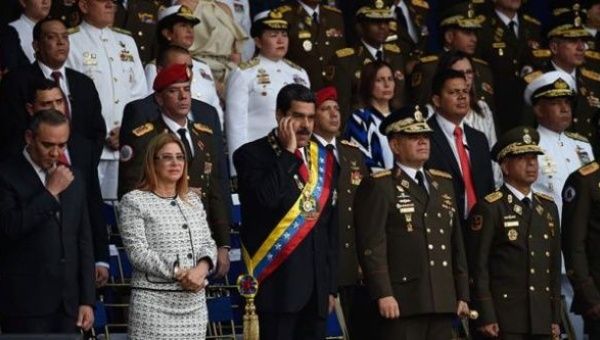 Venezuela’s President Nicolas Maduro has survived an apparent attack on his life during a military parade. | Photo: AVN

“They have tried to assassinate me today, and everything points to the Venezuelan ultra-right and the Colombian ultra-right,” President Nicolas Maduro said.

August 4 (teleSUR) Venezuela’s President Nicolas Maduro has survived an apparent attack on his life during a military parade celebrating the 81st anniversary of the Bolivarian National Guard in the capital, Caracas.

In a televised national address late Saturday, Maduro said he was fine and laid blame for the attack firmly at the feet of “right-wing imperial forces” who he said had hired the would-be assassins.

“They have tried to assassinate me today, and everything points to the Venezuelan ultra-right and the Colombian ultra-right, and the name of Juan Manuel Santos is behind this attack,” he said.

“I must inform that they have been captured – those who attempted to take my life – and they are being processed. I won’t say more, but the investigation is very advanced.

“I tell the Venezuelan opposition that I guarantee you can live in this country peacefully. If something happens to me, you will have to face millions of Campesinos and humble people making justice with their own hands.

“I am alive, and I can tell you that after this attempt, I am even more determined to fight for the revolution.

“The preliminary investigation indicates that many of those responsible for the attack, the financiers and planners, live in the United States in the state of Florida.

“I hope the Trump administration is willing to fight terrorist groups that commit attacks in peaceful countries in our continent, in this case, Venezuela.”

“President Nicolas Maduro asked me to inform the country about what is happening and extend peace to everyone,” Rodriguez said.

“When we were at the military parade 81st anniversary, at the end of the event in Bolivar Avenue in Caracas, at 5:41 p.m. there was an explosion.

“An investigation has already been launched. Several flying objects, like drones, containing explosives were detonated close to the presidential platform and in some locations along the parade.

“The investigation has already produced evidence that this was an attempt against the life of President Nicolas Maduro, but he is completely unharmed.”

Seven military personnel were reportedly injured in the explosion, but Maduro “has already returned to his normal job,” Rodriguez said, adding: “They have failed and they will continue to fail.”

Maduro’ speech was cut short during the event on Saturday and soldiers were seen running before the televised transmission was cut off.

While Maduro was speaking about Venezuela’s economy, the audio suddenly went. He and others on the podium suddenly looked up, startled.

The camera then panned to scores of soldiers who started running, before the transmission was cut.

Bolivian President Evo Morales later posted a message of support to the victims of the attack. Writing on Twitter, he said: “We strongly repudiate a new aggression and cowardly attack on Nicolas Maduro and the Bolivarian people.

“After the failure in his attempt to overthrow him democratically, economically, politically, and militarily, now the empire and its servants threaten his life.”