Maduro: More Revolution, Out With Corruption 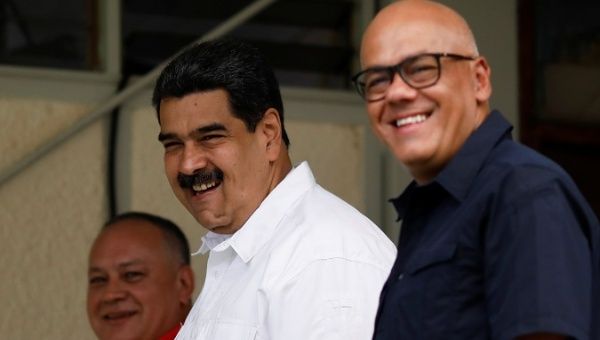 As polling stations were tested across the country, Maduro assured voters the country’s electoral system remains transparent, and he’s cleaning up the banks.

May 6 (teleSUR) Venezuelan president and incumbent Nicolas Maduro said in a press conference today that his government is “against corruption and for revolution.”

The president and lead candidate in the country ’s presidential elections scheduled for May 20 says his administration is going after “financial mafias” within the country.

The president said in his address to the press that authorities had detained 250 bank officials and employees who had syphoned millions of Venezuelan bolivars – the national currency – in cash out of the country.

Just last week the government announced it had discovered an illicit currency extraction operation they call, “Paper Hands”, which allegedly attacks the Venezuelan economy through the illegal transfer of Venezuela’s currency out of the country, mainly to Colombia.

Venezuela’s Vice-President Tareck El Aissami announced the other day that 1,133 accounts – mostly from the Banesco bank – have been blocked for transaction irregularities revealed by the “Paper Hands” investigation.

“Venezuela has everything it needs for a sustainable and stable economy,” said the president.

Maduro, government employees and thousands of eligible voters were out today participating in an electoral simulation that allowed citizens to practice using the country’s newest polling machines at some 500 stations across the nation. The stations were open until 3:00 p.m. local time.

At today’s press conference Maduro encouraged everyone to get out and vote in two weeks  “because in Venezuela the president is chosen by the vote.” He added he will be the first to “to recognize the results of the May 20 election.”

Venezuela is the only country that has carried out four elections over a period of 10 months, Maduro told the press today.

The president said that the international press and Facebook are “censuring” Venezuela, not allowing him to get information to the people, “but we’re going to overcome this blockade.”

Minister of Communication Jorge Rodriguez, told the press at the same conference that Venezuela has one of the most audited electoral systems in the world.

“There is no system more transparent than Venezuela’s. Today’s simulation is a practice audit because it lets us evaluate the system’s logistics and how well the machines are functioning, and today’s test matches the previous 16 audits that were also successful,” said Rodriguez.