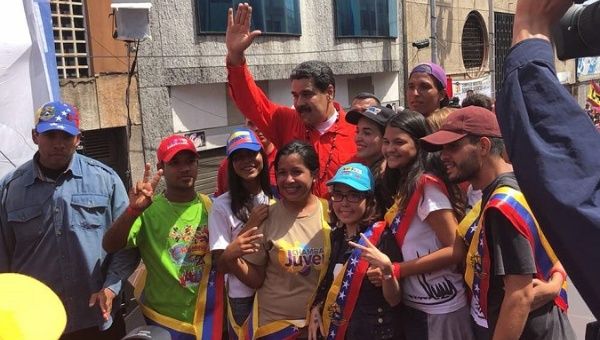 Venezuelan President Nicolas Maduro poses for photos with residents of Bolivar state after speaking to the press at the launch of his electoral campaign. | Photo: teleSUR

The president said he was sure “love will triumph over the economic war” in the upcoming May 20 elections.

April 23 (teleSUR) Nicolas Maduro, president of Venezuela and candidate of the Frente Amplio de la Patria, or FAP, coalition of leftists and communists parties, kicked off his presidential campaign in a press conference in Bolívar state Monday, saying that “this is a new start to get 10 million votes and with the blessing of God we will have the victory.”

The president further stressed that “love will triumph over lies, manipulation and economic war.” He also stated that he has been loyal to the legacy of Commander Hugo Chávez and that he is ready for the upcoming elections scheduled for May 20. “Five years ago I was a rookie, I was beginning a path full of pain, but here I’m ready for the battle.”

In support of the candidacy of the Venezuelan president, the Minister of Communication and Information Jorge Rodríguez, said that “Maduro is the candidate of loyalty, which guarantees peace and the future of Venezuelans despite the fact that there is a sector of the right that has wanted to implement destabilizing plans abroad “.

“The people will give a lesson to a group of the right that is abroad, because Venezuelans want peace, prosperity, and the president will continue taking care of the people, the great missions to protect the majority of the citizens who were forgotten by members of the opposition,” Rodríguez argued.

Commenting on the violent events in Nicaragua, President Maduro said he has been in contact with President Daniel Ortega arguing that the government there is “facing a violent ambush by groups that unfortunately have done a lot of damage to that country, as has happened in Venezuela.”

Maduro added that “I am sure that Nicaragua will achieve peace, that the strength of its people will triumph over these violent groups.”