Maduro Has 51% of Voter Intention in Venezuelan Race: Survey 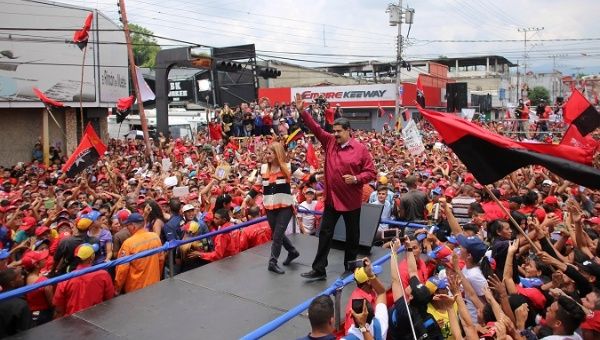 The study shows that 71 percent of Venezuelans believe Nicolas Maduro will win the elections, regardless of affiliation or political leaning.

April 29 (teleSUR) Venezuelan consultancy Hinterlaces reported Sunday that in its most recent poll data show Nicolas Maduro, the presidential candidate for the Frente Amplio de la Patria coalition, as the winner of the upcoming May 20 elections with 51 percent of the vote.

The study also reveals that 71 percent of Venezuelans believe that the Venezuelan president will win the elections, regardless of affiliation or political leaning, while 18 percent said Henri Falcon, the candidate for Advanced Progress and Movement to Socialism candidate.

Meanwhile 16 percent indicated that the winner will be the candidate of the Hope for Change Javier Bertucci. The rest 5 percent of the respondents did not know or say who they thought would be the winner. Also none of the people interviewed named the other presidential candidates, Reinaldo Quijada and Luis Alejandro Ratti.

Responding to the question: “if the presidential elections were held in Venezuela this Sunday, who would you vote for?” the surveyed said 51 percent would vote for Nicolas Maduro; 28 percent for Henri Falcón; 16 percent for Javier Bertucci; and 5 percent responded that they will not vote for any of the postulates.

The presidential elections in Venezuela take place as Venezuela suffers a coordinated economic and political interference led by the United States and its regional allies in Latin America.

Faced with this situation Maduro has called for defending the economic sovereignty of the country and consolidating the social missions and programs for protection of the people.

For its part, the National Electoral Council  (CNE) conducted five audits for the May elections and the operation of the electoral system has been endorsed by all technicians of the political parties. who confirmed the “transparency and strength of the system.”