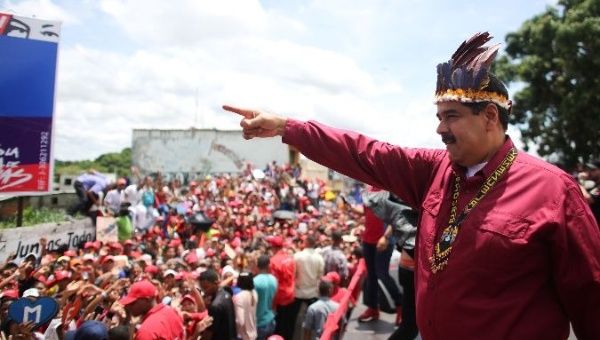 May 16 (teleSUR) Venezuelan President and presidential candidate Nicolas Maduro foresees nothing less than a “great victory” for him and his party, the United Socialist Party of Venezuela (PSUV), come the May 20 presidential election, he said during an interview with France24 channel and added that increased attacks against him and his government indicates the Western world’s fear of his victory.

Maduro accused Western countries, particularly the United States and France, of “trying to put pressure on the country” in order to overthrow the Bolivarian Revolutionary government.

He reserved his harsh words for U.S. President Donald Trump, whom he said follows an “extremist line” in respect to foreign policy towards Venezuela. “The Ku Klux Klan of Washington is pursuing us.”

He said interference into the internal affairs of the people of Venezuela is “unacceptable,” affirming that the Bolivarian Revolution has an “unblemished democratic record.”

Though he didn’t rule out an invasion attempt or coup d’etat sponsored by the United States, he assured that the latter will not materialize, as did happen in 2002 when the late Venezuelan President Hugo Chavez was deposed for a two-day period by some within the ranks of the armed forces.

Maduro also took issue with French President Emmanuel Macron, saying that he is implementing “neoliberal policies that are destroying France” and “defends the interests of bankers and the richest.”

He denied that Venezuela’s economic situation is as critical as the mainstream media portrays it to be. However, he did acknowledge that “there are some economic problems” that “will be resolved,” according to France 24.

Maduro attributed the overwhelming bulk of those problems on the struggles his government faces “by the economic forces of the United States” and the “oligarchy that did not conform when it lost political power.”