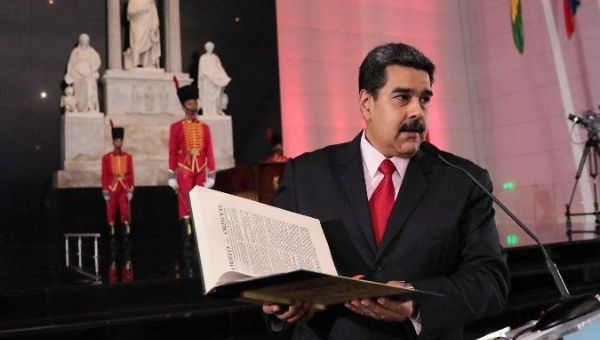 “We have defeated you and we are going to defeat (you) wherever you are,” Venezuelan President Nicolas Maduro said.

June 28 (teleSUR) Venezuelan President Nicolas Maduro has weighed in on U.S. Vice-President Mike Pence’s tour of South and Central America, calling him a “poisonous viper” and vowing to defeat what he described as Washington’s efforts to isolate and force him to step down.

“Every time the poisonous viper Mike Pence opens his mouth, I feel stronger. We have defeated you and we are going to defeat (you) wherever you are,” Maduro said during a televised speech.

Pence’s first stop was Brazil where he spoke with Senate-imposed President Michel Temer. During a joint press conference, Pence said, “The U.S. asks Brazil to adopt firm attitudes towards Nicolas Maduro’s regime, which destroyed democracy and has built a brutal dictatorship that has made Venezuela a poor country.”

Brazil, a member of the so-called Lima Group, is a key U.S. ally in the region. “Brazil has led efforts to expel Venezuela from Mercosur, joined the U.S. to suspend Venezuela from the Organization of American States. Now, the time has come to act more firmly,” Pence added.

In response to his comments, Venezuelan Foreign Minister Jorge Arreaza tweeted, “What an irony and hypocrisy that @VP Pence, whose racist government separates families and cages innocent children, intends to interfere in the affairs of our region. Venezuela and Brazil reject the presence of such violator of Latin American immigrants’ human rights.”

Pence arrived in Ecuador on Wednesday where he’s scheduled to meet with President Lenin Moreno. In recent months the United States and Ecuador have been looking to increase security cooperation under the pretext of countering terrorism at the border following kidnappings and attacks against the military. Members of the U.S. military and the Federal Bureau for investigations came to Ecuador in order to “assist” with the investigations.

Critics of the Moreno government say that such deals with Washington are reversing years of policies by former President Rafael Correa that sought to reduce and counter U.S. influence in the Ecuadorean state institutions, which was widely present under previous administrations.

His tour of the region, which is expected to boost regional pressure on the Venezuelan government, includes visits to Guatemala, El Salvador, and Honduras.

Maduro, for his part, concluded that no matter where Pence travels the “Bolivarian Revolution becomes stronger.”