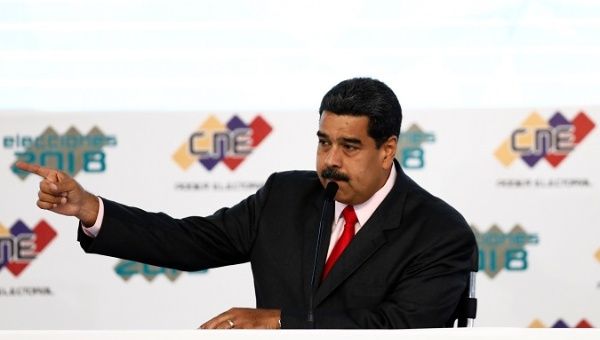 Venezuela’s President Maduro addresses the audience during the ceremony to receive a certificate confirming him as winner of Sunday’s election, in Caracas. | Photo: Reuters

May 22 (teleSUR) President Nicolas Maduro said United States Chargé d’Affaires Todd Robinson and head of political affairs Brian Naranjo have 48 hours to leave Venezuela. Maduro says the decision to expel the pair is aimed at defending Venezuela’s sovereignty and in rejection of Washington’s interventionist policies against the country and its people.

“I have declared him persona non grata, and I announce the exit of the United States Chargé d’Affaires in 48 hours,” Maduro said of Todd Robinson during the official proclamation of his re-election. He accused Robinson of being involved in “a military conspiracy” against Venezuela saying the U.S. embassy had been meddling in the military, economic and political issues, and vowed to present evidence to the nation shortly.

“Neither with conspiracies nor with sanctions will you hold Venezuela back,” Maduro said, at the National Electoral Council’s (CNE) headquarters in downtown Caracas.

He said that the government had given the embassy more than 20 warnings regarding interference into Venezuelan internal affairs, but all had fallen on deaf ears.

Maduro announced the measures in a speech after receiving credentials from the country’s National Electoral Council confirming his new presidential mandate following his victory in Sunday’s election.

Maduro said that Venezuela faces unconventional forms of war that seek to colonize it again and destroy its democracy but the country and its people have prevailed.

“A miracle brings us here. How many obstacles we have overcome. The maker of the miracle is the people of Venezuela, with their strength,” Maduro told the crowd at the CNE. “Venezuela is capable of overcoming any challenge, and has the democratic and institutional maturity and strength of conscience.”

“Venezuela is capable of overcoming any challenge, and has the democratic and institutional maturity and strength of conscience.”