Lula Pens Thank You Letter to Cuban People For Their Generosity 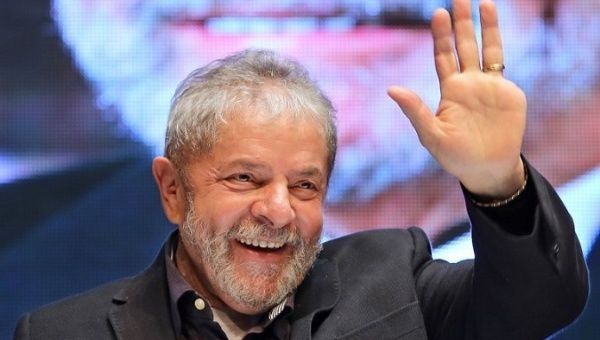 Former President Luiz Inacio Lula da Silva sent a letter from Curitiba Prison – where he is being wrongfully held, to the Cuban People to thank them for their generosity.

Dec 16 (teleSUR) Brazilian Workers Party (PT) leader and former President Luiz Inacio Lula da Silva has sent a letter to the Cuban people to thank them for the magnificent service presented to the Brazilian people with the Cuban medics that attended to millions of Brazilians since 2016 in the More Medics program, that was recently finalized by the Cuban government due to the attacks against the island by far-right president-elect Jair Bolsonaro.

President Lula sent a letter to the Cuban people through the Juventud Rebelde (Rebel Youth), to respond to the decision that the Cuban government ended the More Doctors program. Here is the transcript of the letter in full.

Health is not a commodity, it is not private property. Health is life, the first condition to be able to do anything in this world. Health services cannot be treated as a business. The profession of those who watch over the health of others will always be one of the most beautiful ones, it will always be a mission, an act of generosity and affection for others.

In Brazil, Cuban doctors arrived at places where there were no Brazilian doctors. They arrived to many poor and distant communities, some of them, indigenous communities, which had never been attended to by a health professional.

Many criticized the government of President Dilma Rousseff for bringing them. How nice it would be to be able to do without them! That Brazil had enough doctors to cover all the positions in the interior and the poor peripheries. How good it would be if we had, like Cuba, enough doctors even to export them to other countries! It is very nice to see how a Latin American island exports doctors all over the world. It is better than what rich countries do, like exporting soldiers, or throwing bombs at poor communities. Cuba for its part exports life, love, health.

It happens that we do not have too many doctors. Brazil was the last country in South America to have a university, inaugurated in 1922. And it was created only because they had to grant the title of Doctor to the King of Belgium! Brazil and Cuba lived through centuries of slavery and colonial exploitation. But of the two, only Cuba has enough doctors to export them to the world.

Before the Workers’ Party took power in Brazil, medicine was an exclusive career for the sons of the rich. Before the PT came to power, the poor people’s children did not even have the right to DREAM of becoming doctors. We created quotas, in federal universities, for Black people and for the students of public schools; we enlarged the mechanisms so that young people could study for free in private schools, or instead, that they paid low-interest rates once they finished their studies. We opened new universities, including medical courses, in the interior of the country. We increased the enrollment of poor and Black youth in higher education. When the coup d’etat to democracy took place in 2016, with the aim of removing the PT from the Government, one of the first measures adopted was to prevent the creation of new courses of medicine in the country. Prohibition on the training of more health professionals. How absurd.

But the Government of Michel Temer, at the request of the mayors of the cities, aware of how difficult it was to find doctors for health units, maintained the Mais Medicos program from 2016 until 2018.

I thank the Cuban doctors who knew how to overcome the criticisms and prejudices and taught us that a more humane medicine is not only possible, but it is also more efficient to improve the health indicators of our communities. Finally, the doctors exchanged experiences and knowledge with many Brazilian doctors and alerted everyone about the importance of preventive medicine and medical attention to families.

That’s why I want to express to the Cuban people: that they can feel very proud of their doctors and their medical schools. In Brazil, you have won millions of admirers, the gratitude of millions of people.

The district of Batinga, in the city of Itanhem, in Bahia, organized a march with the participation of the entire community to say farewell to Dr. Ramon Reyes, who for years gave him medical attention and was able to win the sympathy of all. They came out with posters in which they thanked all the good things that doctor did and they were hopeful that he would return one day. A simple and sincere homage of a people who received the attentive care of a son from a distant Caribbean island, for decades surrounded by a fierce blockade imposed by the most powerful country on the planet, and that still manages to export doctors and knowledge.

The bonds of fraternity existing between peoples are stronger than the irrational hatred of some representatives of the elite.

It is the lesson given by the Cuban doctors in so many countries of the world and also here in Brazil.