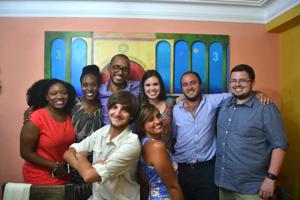 Many students choose to study abroad in English-speaking countries with stable politics and economies, but this was not the case for the University Honors College students who accepted the challenge to spend two and a half weeks studying in Havana, Cuba, this summer.

In spite of the obstacles this trip could present, Christian Soler, international studies junior, was drawn to it because of his heritage. Coming from a Cuban family, he found the culture interesting and had the opportunity to get to know his roots through family there.

Soler took a 25-minute trip to Miramar to visit with his third cousin and his cousin’s wife, who shared stories about Soler’s grandfather and gave him a greater appreciation for the Cuban culture.

Other than Soler’s side trip, the students lived in “casa particulars,” the Spanish term for private homestays, in Havana for the majority of their stay. The students were able to practice their Spanish in this setting, though they were not forced to do so.

The basis of Soler’s honors trip included classes on the history and society of Cuba, an ideal practice environment for his Spanish and various excursions.

Soler’s favorite excursion was to the National Literacy Museum. He said he appreciates the post-Cuban Revolution effort to eliminate illiteracy in Cuba, among other efforts to improve life for Cuban citizens.

Soler’s professors on this trip were frank about the conditions in Cuba, he said. There will be much controversy in the coming years, they said, about these conditions.

But despite the political and economic instability of their country, Soler believes the “Cubans are some of the friendliest people,” helping him with language barriers and to better understand their culture.

The trip was not only a time for class studies, but also for individual observation.

“It doesn’t look like a third world country because it’s beautiful, but the people are suffering,” Soler said.

“It’s key for people to immerse themselves in other cultures — get out of our own comfort zones,” he said.

“Part of my mission as dean will be to greatly enhance the number of students who study abroad,” Earle said.

There are numerous travel opportunities for Honors College students, and corresponding scholarships are available to students, such as the Starmount Life Insurance Study Abroad Award and the Tiger Athletic Foundation Scholarship.