Life in Cuba as seen by a Cheyenne resident 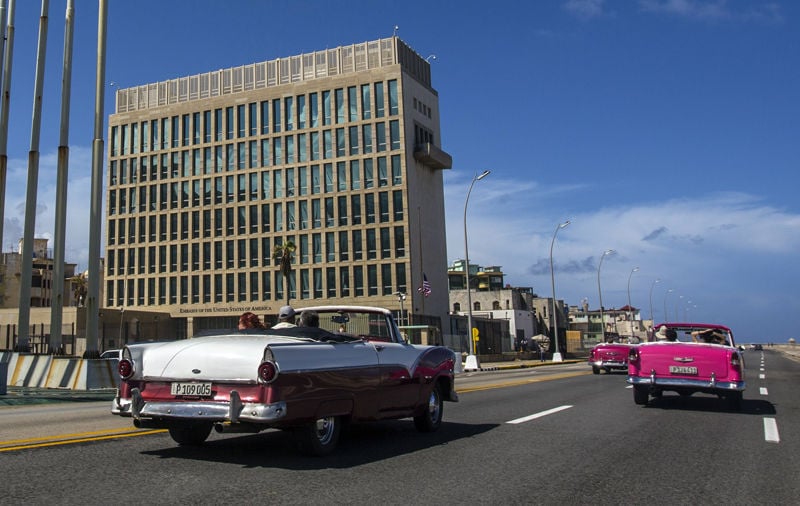 By Annette Woofenden, Special to the Wyoming Tribune Eagle, Dec 16

Editor’s note: Annette Woofenden is a Cheyenne resident who works in the retail sector. She traveled to Cuba in 2017 on the state department license of ‘Support for the Cuban People’ and shared her experiences with the Tribune Eagle.

Travel tip number one: when you’re in the basement bar of the Museum of Rum in Santiago de Cuba, don’t order a vodka and orange juice.

“I make the best Mojitos in the world!” said Eduardo in his rich baritone as he gestured to the walls on which tourists from around the world attested to this fact. “And you come here asking for a Madras?”

“I don’t want a Mojito. You’ve got vodka right there,” I pointed. Back and forth we went until it became clear that Eduardo was not going to make anything but a Mojito. With his money-back guarantee, I capitulated. And his Mojito was indeed very good.

Like Eduardo, Santiago de Cuba exudes an Afro-Caribbean essence, and is worldly, self-assured, and entrepreneurial.

Cars and buses clog the narrow, hilly streets, belching thick black exhaust. That and the old, worn buildings give the city a gritty feel, but the streets and gutters are cleaner than any in America. You will also not find any beggars, harassers, or homeless people on her streets.

Mid-morning sees an increase in traffic as professionals drive or bike to their jobs. Late morning brings the street sweepers who clean the gutters – men with brooms. In Cuba, machines have not yet replaced manual labor. Grass is still cut with handheld scythes as well.

In the evenings Cubans spend quality time with their families, playing games, watching TV, knitting, embroidering, enjoying conversation with one another.

Few Santiago homes have glass windows, and fewer still, curtains. They use aluminum louvers, the default position of which is open so the breeze will flow through. When the rains come, the louvers are quickly snapped shut.

Curb appeal is not a priority in Cuba. From the outside, many Cuban residences give off the impression of dilapidation and disrepair. Inside, however, they are oases of bright colors, painted murals, stone tile, and potted plants.

With 431,000 residents, Santiago is Cuba’s second largest city. It is also the city that has spurred Cuba’s numerous revolutions for independence.

Prior to his death in 2016, Fidel Castro instructed that he be buried in Santiago but under a rock. No grand statues or mausoleums.

His people honored his request, but that rock is a massive boulder. His burial site stands out in stark contrast to the white mausoleums and monuments for Cuba’s other historical and cultural icons.

Travel tip number 2: when you’ve decided on a whim to cook dinner for your husband, you’ll need the speed, endurance, and grit of a Tour de Prairie cyclist because grocery shopping in Cuba is a competitive sport.

You’ll also need your own bag.

“You need a bag!” called out the man in English, stating the obvious. I turned to see Marco, our waiter from the night before.

“I know!” I called back, laughing while struggling not to drop my armload of food.

“You should just come here tonight.”

Trinidad is a densely packed, yet quaint, colonial artists’ community. Very few cars and buses occupy its cobblestone streets. The air is clean, as are its streets and gutters.

While my husband was off on a bicycle who knows where, I donned the shawl of Cuban esposa determined to provide dinner. Boxes of Barillo penne pasta were plentiful, which decided the menu.

I raced over many city blocks from corner stall to corner stall trying to buy ingredients before they were sold out, all the while listening for the clip clop of horses’ hooves. Throughout the day in Trinidad, Cuban farmers on horse-drawn wagons bring fresh produce and meat into town.

Deciding to cook led to my biggest conundrum: whether or not to buy a $25 bottle of olive oil imported from Spain. For $25, my husband and I could enjoy a sumptuous meal at Marco’s restaurant.

After much dithering, I bought the olive oil but used only a few tablespoons. On the morning we left, I pressed the bottle into our hostess’s hands. Holding it up as though examining a trophy, she said, “Oh thank you so much! This is my favorite.”

Travel tip number three: Talk with the Cuban people. What we discovered when we talked with them forced us to reconsider what we thought we knew about Cuba.

For example, nearly every Cuban we met has traveled out of the country for work, school, holiday … and then chosen to return. Samsung smart phones are everywhere and with them, access to the Internet.

Vintage American and Russian cars are ubiquitous, but there are also contemporary cars with air conditioning and electric windows.

Cubans are well informed about world events and American politics.

Cubans are loyal to Fidel Castro. They speak freely about living in a tough economy, but never once did I hear a Cuban criticize Castro. Rather, the thrust of their ire is against the American embargo. And yet, they couldn’t have been more gracious and welcoming to my husband and I.

Cuban cowboys are commonplace for the large beef and dairy industry. However, my vegetarian husband ate well as Cubans have numerous vegetarian dishes incorporated into their diet.

There is an easy camaraderie among the different races in Cuba as well. Indeed, it appears that race is a non-issue. Also, there is a comfortable and relaxed relationship between the genders. My husband and I avoided the tourist path in favor of meaningful interactions with Cubans. He did his thing and I, mine, and never once did we feel unsafe. When I was on my own, never once was I harassed or catcalled.

To visit Cuba is to meet a society of enterprising people who take pride in their nationality and history. They want a relationship with the United States, but not at the expense of compromising their sovereign identity.