Lessons the U.S. Can Learn From Cuba and the Ebola Crisis 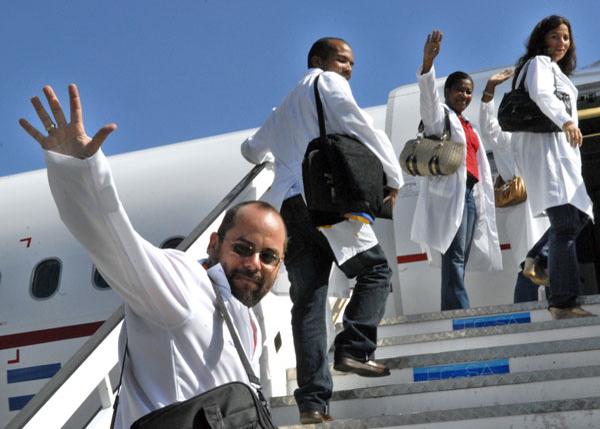 A story I read on Cuba’s sending 300 additional medical personnel to Africa to help with the Ebola epidemic made a great impression on me. Published in Telesur English, the piece read, in pertinent part:

Cuba, which has about 50,000 health workers stationed across the world, received accolades from the UN and the World Health Organization (WHO) for its effort against Ebola, last week, when it already had the largest foreign medical team fighting the killer virus in West Africa, consisting of 62 doctors and 103 nurses.

The U.S. has sent 3,000 troops to Liberia as part of its response to Ebola, which it considers a matter of national security. In addition, the U.S. pledged 65 clinicians and support staff, to treat infected health care workers, but not civilians.

The import of these few lines is great. Cuba, a poor country with a population smaller than the metropolitan area of New York City and a country under a 50-year embargo imposed by the U.S., is sending more medical staff to combat the Ebola virus than any other country and a multiple of what the U.S. is sending.

And, as is quite typical, the U.S.’s chief contribution is the sending of soldiers. This is a repeat of the situation in Haiti after the 2010 earthquake when the U.S. sent 14,000 soldiers while Cuba and Venezuela, with doctors already on the ground, have been the backbone of the effort to fight the ensuing cholera epidemic.

The U.S.’s decision to send soldiers to fight disease says it all. Every problem to the U.S. — a country which is armed to the teeth and which has become the proverbial hammer of the world — looks like a nail.

This state of affairs has become dangerous for the world which fears the U.S. more than any other country, and for the U.S. itself which has been drained of treasure and the blood of its young fighting men and women who have been sent to fight far-flung wars which, let’s face it, have largely caused more problems than they have solved.

Just to recap a few of its latest military adventures, the U.S. mobilized and supported Islamic extremists in Afghanistan to fight the Marxist government there in the late 1970s, and then to combat the Soviets who invaded just as the U.S. had intended they would, only to be attacked by some of those extremists, including Osama bin Laden, in 2001.

The U.S. has been involved in a war in Afghanistan since 2001 against the Taliban which naturally grew out of the extremist movement the U.S. helped organize back in the 1970s to ostensibly fight communism. Meanwhile, the U.S. fought two major wars in Iraq to combat (at least allegedly) aggression and terrorism, only to unleash much more terrorism in that country — terrorism which we are now again mobilizing to fight.

Beginning in 2007, the U.S. began secretly backing and inciting Islamic extremists in Syria in order to undermine the government there. And now, frightened by these extremists, the U.S. is now planning to attack them. Finally, the U.S. watches as Libya collapses and is overrun by extremists as a direct consequence of the U.S.-led bombing campaign against the Libyan government in 2012.

As a consequence of all of this war-making, the U.S. is trillions of dollars poorer and the world is more insecure than ever. We have truly reaped a whirlwind from our own violence, and shall continue to until it is stopped by the only force that can make it stop — the American people.

Meanwhile, little Cuba, with the help of Venezuela, sends doctors throughout the world to combat disease, and is winning the world’s praise as a result. Maybe the U.S., instead of vilifying Cuba and Venezuela, should learn a lesson from them.

Instead of trying to combat every problem, real and imagined, with military might, the U.S. may wish to solve problems more constructively — by engaging with other countries and peoples peacefully and helping to alleviate their poverty and their illness.

Is it possible that such a course of action, prescribed by the Judeo-Christian values we claim to espouse, might lead the world to hate us less and dry up the recruitment of young men and women by extremist groups? Certainly, this could be no less effective than the violent means we have chosen to use for these too many decades.