Lazaro Martinez honoured to uphold a Cuban tradition in Eugene 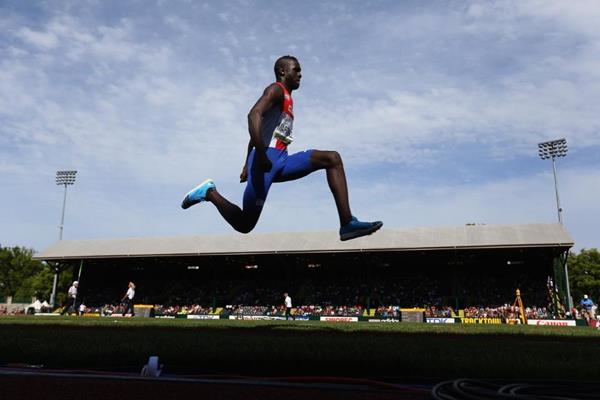 Lazaro Martinez on his way to gold in the triple jump at the IAAF World Junior Championships, Oregon 2014 (copyright, Getty Images)

Heir of a successful tradition in the triple jump, Lazaro Martinez left his mark on Hayward Field and won a much-awaited gold medal for Cuba on the final day of the IAAF World Junior Championships, Oregon 2014 on Sunday (27).

Martinez, who stands 1.92m tall, broke the triple jump championship record twice in the final, first with his opening 17.08m, four centimetres farther than his countryman Yoelbi Quesada’s mark set in 1992. He then improved it 17.13m in the following round.

“I was aiming for six jumps and the world junior record (which is 17.50m and stood to the former East German Volker Mai since 1985), but I felt a minor discomfort in my right ankle on my second jump and passed two rounds to recover,” said Martinez. “This is a win for all the team. I am very proud to bring the gold medal to Cuba after four silver medals in Eugene.”

Billed as the clear favourite after his world youth best of 17.24m earlier in the season, his 2014 best was almost a metre better than the next man on the list but Martinez still treated the competition like any other.

“I came to this competition with the mindset that anyone could challenge me. I don’t take anything for granted.

“I am honored to keep the (Cuban) tradition alive in the triple jump,” he added. “We have a young generation of young jumpers who already shone internationally such as (world championships medallists Ernesto) Reve and Pedro Pablo Pichardo. I am humbled to have my name alongside great Cuban jumpers who preceded me.”

Martinez joined past Cuban male champions in this event: Yoelbi Quesada in 1992, Rene Hernandez in 1996, David Girat in 2002 and Pedro Pablo Pichardo in 2012.

A native of Guantanamo, Cuba’s easternmost province, Martinez practised a variety of sports, including basketball and judo up to when he was 10. His mother, former 400m runner Isabel Contreras, encouraged him to take up athletics a year later and connected him to a friend and coach.

“Initially I did not like athletics,” he said. “But I did a test with the coach and she told me I had the potential to enter the provincial sports school.”

After an initial success on the track and especially in the jumps, he started to specialise in the jumps in 2010 under the watch of coach Manuel Guilarte. In his first season, he improved to 14.64m and then to 15.38m, a national age-14 best. He also cleared 1.97m in the high jump. Those results opened the doors to the national junior team.

“Even if I had success in athletics, I did not like it much,” he said. “It was coach Guilarte who instilled in me the love for the sport. To me, he is the best coach in the world.”

When he joined the national junior team in Havana, he started training under the guidance of coach Marcos Juvenal and continued to show rapid progress.

A world youth leader with 16.53m heading into last year’s IAAF World Youth Championships, he lived up to the expectations in Donetsk by winning with a personal best of 16.63m.

Hard work through the winter paid off again and in massive proportions early in 2014.

In his season opener, he landed at 17.24m to become the first youth athlete ever to break the 17-metre mark. In the process, he joined 22 other Cubans in surpassing that barrier.

A consistency around 16.80m-17.10m paved the way for his first IAAF Diamond League invitations in Shanghai, Rome and Oslo.

And he did not disappoint. He finished second in the Chinese city and third in the Italian capital, only beaten by world and Olympic medallists Will Claye and Christian Taylor.

“It is a privilege to compete with the world’s best,” he said. “Imagine, I was watching them on TV in the Olympics and the World Championships in 2012 and 2013 and now competing with them. It is an incredible experience. I have nothing to lose and it inspires me to achieve better results.”

Martinez has become accustomed to receiving a lot of praise for his talent and potential.

“I am aware of that, but I could not have achieved anything it if were not for my hard work in training. Triple jump is a very intensive event, it requires a lot of preparation to become a good jumper.”

There is more to come before 2014 wraps up. He now has his eyes set on the Youth Olympic Games in Nanjing next month and then back to Europe for more IAAF Diamond League outings.

Outside the track, Lazaro is in all other respects an ordinary Cuban teenager. In his free time, he enjoys listening to Cuban reggaeton and US singers such as Usher and Beyonce. He finished high school with good marks and plans to take a program to become Physical Education teacher.