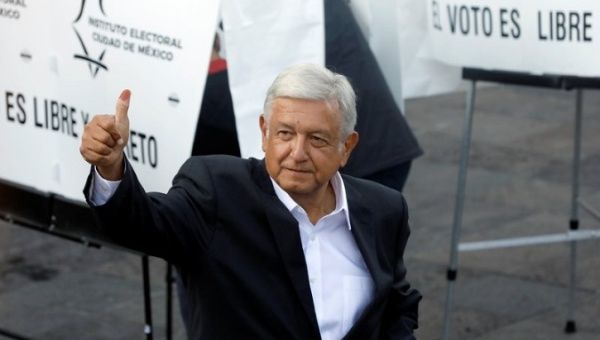 July 1 (teleSUR) Leftist and progressive leaders from around the world have backed Andres Manuel Lopez Obrador, better known as AMLO, who is the top polling candidate going into Mexico’s presidential elections.

Former Brazilian President of the Workers’ Party, Dilmia Rousseff, said that if AMLO wins, it would not just be a victory for Mexico, but for all of Latin America. “Strength so that the friend people of Mexico choose Lopez Obrador this Sunday,” Rousseff said. “It would be a victory not only of Mexico, but of all Latin America.”

Meanwhile former Argentine President Cristina Fernandez, and former President of Ecuador Rafael Correa also echoed a similar sentiment. “This Sunday, presidential elections are in Mexico. Andres Manuel Lopez Obrador is a hope not only for Mexico, but for the whole region,” Fernandez said.

Correa tweeted that “AMLO would be a fresh breeze, a great hope for Latin America and Mexico.”

Also Leftist former presidential candidate in Colombia Gustavo Petro, who just had his own run at the presidency in Colombia, tweeted in support of AMLO saying that politics is beginning to change in Latin America.

Captioning a photo of AMLO celebrating the closing of his campaign with supporters, Petro said “When politics begins to change in Latin America. Social fighters with young ideas ready to change the world. Onward Lopez Obrador.”

UNASUR Secretary General Ernesto Samper agrees with Petro, saying that an AMLO victory would be “the beginning of the pendulum’s return in Latin America toward governments committed to social justice and sovereignty.”

Chilean flimaker and socialist politician Marco Enriquez-Ominami shared on social media a photo of him and AMLO together, and said that “hope can triumph in Mexico by the hand of Lopez Obrador. All strength to him and to the Mexican people, for change, for peace and prosperity in Latin America.”

Support didn’t only come from Latin American leaders. French leftist leader and former candidate for Prime Minister Jean-Luc Melenchon also shared a picture of him and AMLO together, and said that “From France we greet the Mexican people with love. The triumph of Lopez Obrador approaches, and with it the resurgance of a great nation and the awakening of hope for the world.”

United Kingdom Labour Party leader Jeremy Corbyn Tweeted in Spanish his hope that elections would be peaceful and that democracy and human rights triumphs.

“I hope that the coming elections in Mexico are peaceful and respect the electoral process. I am very sorry for the loss of life in the course of elections. In memory of the deceased candidates, I hope that democracy, justice and human rights prevails,” Corbyn said.

Although he did not mention AMLO by name, Corbyn is known to be a friend of the Mexican candidate.