Latin America Has Little to Expect from Lima Summit 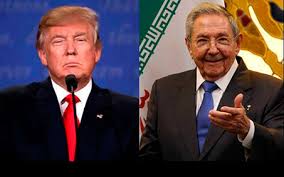 Havana, Apr 10 (Prensa Latina) At a time of neoliberal recipes, of crusades against progressive leaders and of Donald Trump occupying the White House, the 8th Summit of the Americas in Lima, Peru, seems to offer little to those who want a united and less unequal Latin America.

In fact, these continental meetings that started in Miami in 1994 have just been a piece in the United States’ vision of Latin America, which is seen by power circles in that country as their backyard, a stance supported by the revitalized Monroe Doctrine.

On the occasion of the 8th Summit, Prensa Latina interviewed experts from the Center for Hemispheric Studies and on the United States (CEHSEU), which is attached to the University of Havana.

Doctor in Historic Sciences Ernesto Dominguez and the master in Contemporary History and International Relations, Dalia Gonzalez, agreed that these forums are part of the hemispheric conception of the United States.

We see them as part of the ‘inter-American system’ under U.S. leadership, although the summits are called and organized by countries, it is the Organization of American States (OAS) that provides the mechanism to manage its processes, they warned.

The experts also called the attention on the coincidences between the topics for debate at those triennial meetings and the axes of Washington’s foreign policy, ‘although there are not so easy to define, beyond general strategies’.

Since he occupied the Oval Office on January 20, 2017, Republican President Donald Trump has ruled amid controversies and internal and external criticisms of his stances.

Regarding Latin America and the Caribbean, his behavior might be described as aggressive, with positions that include his insistence on building a wall along the Mexican border, the insults at immigrants and the widely condemned description of El Salvador and Haiti as ‘shithole countries’.

Trump has also led a crusade against Venezuela, even threatening with a military intervention, and has promoted the rollback of relations with Cuba, after the rapprochement started by his predecessor, Barak Obama, betting on tightening the economic blockade imposed on the Caribbean island for more than half a century, the return to the rhetoric and the direct promotion of subversion.

According to Dominguez and Gonzalez, although Trump’s policies are not easy to predict, his efforts to eliminate as much as possible ‘what it is known as the legacy of Obama’, who tried to generate an image of dialogue and some attachment to multilateralism regarding the region and the world, although without renouncing the 4th Fleet, the Colombia Plan and the military bases, are evident.

For Doctor in Economics Luis Rene Fernandez, who is also a researcher at the CEHSEU, Trump and his administration are increasingly moving away from multilateralism, so he will be in a difficult situation at the 8th Summit of the Americas, whose high-level segment will take place on April 13 and 14.

Due to its nature, the summit is multilateral, but the Trump administration seems to prefer bilateral negotiations, as well as polarization and internal division, he added.

Even in a scenario marked by the return of right-wing governments to power and neoliberal recipes (either at the polls or through the so-called soft coups), the new U.S. administration will have to face a complicated situation at the hemispheric meeting.

Trump does not even seem to have the support of Latin American right-wing organizations, because his discourse does not fit the multilateral vision and the predominance of dialogue and communication that are supposed to accompany the summits of the Americas, Fernandez noted.

The U.S. president divides, attacks and promotes a particular hostility against Cuba and Venezuela, so he cannot bet on the best hemispheric relations. In addition, his attitude shows his interest in renovating the Cold War approach, he underlined.

Anyway, the White House, the Monroe Doctrine and the subordination of regional elites to Washington do not fit in the environment of the declaration of Latin America and the Caribbean as a zone of peace, agreed upon at the 2nd Summit of the Community of Latin American and Caribbean States (CELAC), held in Havana in January 2014.

A FIELD FOR IDEOLOGICAL BATTLE

More than 100 representatives from Cuban civil society have been participating in Lima since Tuesday in the forums held parallel to the 8th Summit, a presence that they attribute to the need to raise their voices in defense of just causes.

We are attending this forum in a quite difficult and complex scenario, so complex as the one lived by Jose Marti at his time. Therefore, we are loaded with the heart and mind full of the teacher’s ideas about the Americas that he dreamed from the Bravo River to the Patagonia, united and anti-imperialist, Reverend Joel Ortega told Prensa Latina.

Last Sunday, shortly before traveling to Lima, Ortega, who is the president of the Council of Churches of Cuba, noted that in the Peruvian capital, students, women, religious people and other Cuban sectors will denounce the capitalist system and its monopolies due to the corruption they generate and the damage they cause.

They are destroying the planet and are sowing poverty and inequalities, we want to denounce this, we cannot let our Americas be the backyard of an empire, we want it to be an example of solidarity, of brotherhood among people where we all are equal, he underlined.

For his part, the president of the University Students Federation, Raul Alejandro Palmero, noted that at the 8th Summit, Cuban civil society will be the voice of those who suffer in the context of the boom of neoliberalism and hegemonic systems.

We will also defend Venezuela and its Bolivarian Revolution, which were excluded from the summit; the Cuban students will be Venezuelan whenever needed, he added.