Posted on September 29, 2018 by Anthony Brenner 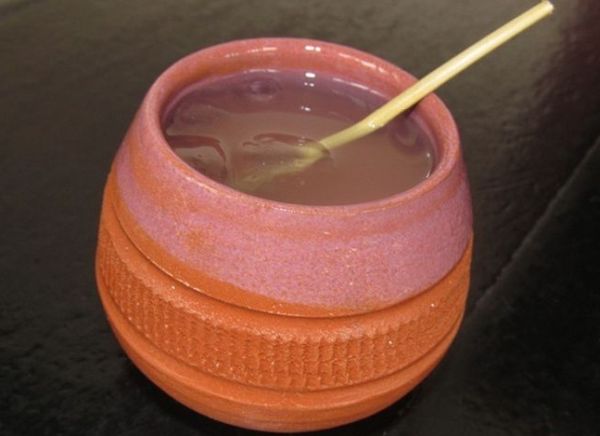 The vessel used to drink the emblematic beverage has become a souvenir that everyone wants to keep. (Photo: Carlos Luis Sotolongo).

Escambray | Sept. 7, 2018, by Juan Antonio Borrego — Canchánchara can be enjoyed at any time in an old house located within the historic center of Trinidad. It is said that this beverage eased the hard times of the struggle against Spanish colonialism

In Trinidad anyone can tell the Canchánchara cocktail recipe by heart: two ounces of rum, two tablespoons of honey, one tablespoon of lemon juice, and some ice. The easy-to-make drink is very much requested by thousands of foreign visitors who arrive in this town, and for whom the word is not always easy to pronounce.

Local residents do not hide the know-how for the preparation of the beverage —considered unique in the world—, and promote the recipe even on the walls of the tavern named after it, which is ran by the Palmares Group from the Ministry of Tourism.

There is a consensus that the Canchánchara was not born in bars, canteens or other places of recreation, but in the countryside back in the 19th century, when Cuban fighters invented the energizing infusion to keep off the cold, respiratory ailments or even loneliness.

Apparently the drink was first prepared in the east of the country. In the beginning it was taken hot, as an invigorating drink, but later on, it turned into a gentler and more pleasant beverage not only for the tourist environment in which it is consumed, but for the refreshing touch it gets from the addition of ice.