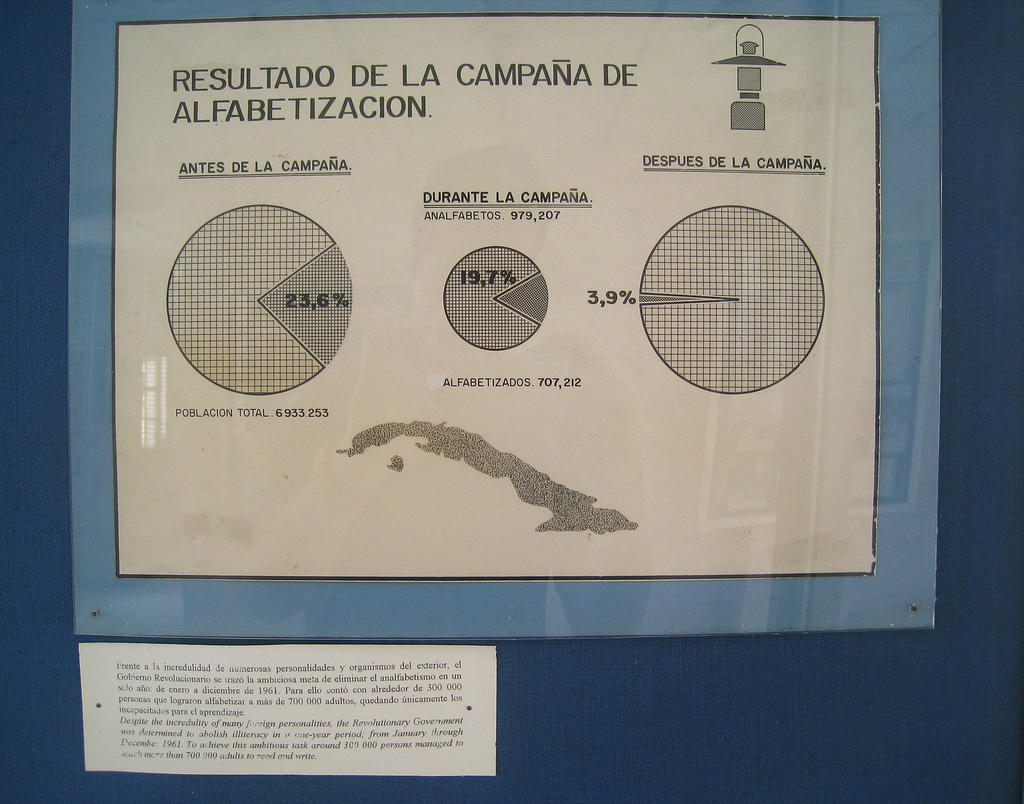 In 1961, Fidel Castro’s new Cuban government organized a massive literacy campaign, recruiting 100,000 teenagers to move to the rural areas and teach illiterate farmers how to read and write.

Altogether, The Cuban Literacy Campaign (Campaña Nacional de Alfabetización en Cuba) recruited more than a million Cubans as teachers, school-builders, trainers of new teachers, and students. By the end of 1961, over 700,000 Cubans had learned enough to read a book and write a letter, raising the country’s official literacy rate to 96%. It stands as one of the 20th century’s most ambitious education campaigns.

Marietta, age 19 at the start of the campaign: “I saw the difference between the city and the country in Cuba. Something had to be done about these very poor people who had nothing to eat and nowhere to live…
We arrived at their houses at four in the afternoon and taught them till ten at night. They felt a little uncomfortable at first, like we were invading their privacy – we could see their poverty.”

Felo, age 13 in 1961: “I was very happy to go there. They were very poor farmers with very poor conditions. I was sleeping in a hammock. The house had a dirt floor, no running water – water came from a well – and the roof was made of leaves. There were no schools in that community, and just one doctor, very far away. The food was very poor but I didn’t care. I lived there about eight months, very happy to teach reading and writing.”

Pamela, age 10 during the campaign: “Some people didn’t want to be taught, because they didn’t understand that they really needed it. Some said, “I’m too old to learn to read and write.”  I explained that reading would allow them to understand what was happening in the entire country, not just in their towns. And no one would be able to cheat them.”

“Before 1959 it was the countryside versus the city. The literacy campaign united the country because, for the first time, people from the city understood how hard life was for people before the revolution, that they survived on their own, and that as people they had much in common. This was very important for the new government.”
— Luisa Yara Campos, Cuban literacy museum director