Kerry to host Cuba foreign minister in Washington on Monday 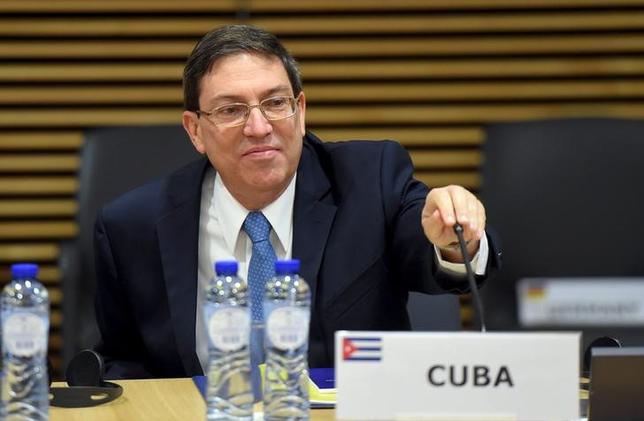 Kerry will host Rodriguez at the State Department after the Cuban official leads the formal reopening of the Communist state’s embassy, a hugely symbolic step in the thaw between the countries initiated by President Barack Obama and Cuba’s President Raul Castro in December.

The Cuban flag will be raised over its mission in Washington for the first time in 54 years. While the U.S. embassy in Havana will also be automatically reopened, no American flag will fly there until Kerry visits to preside over a ceremony, U.S. officials said on Friday. He is expected to travel there in August.

Rodriguez, the first Cuban foreign minister to visit Washington since around the time of the Cuban Revolution, will have a substantive discussion with Kerry instead of “just a passing handshake,” State Department spokesman John Kirby said.

He said the agenda would cover areas of possible cooperation, such as global health and the Cuban people’s expanded “access to telecommunications,” as well as points of contention, including Cuba’s human rights record and U.S. fugitives sheltering on the island.

Re-establishment of ties, agreed on July 1 after several rounds of talks, will be the latest phase in a normalization process expected to move slowly because of lingering disputes as well Havana’s desire to keep a tight rein on Cuba’s society and its state-run economy.

A U.S. economic embargo against Cuba will remain in place, and only Congress can lift it.

White House spokesman Josh Earnest said there was strong support in the Congress for normalization except for a vocal minority with “entrenched partisan interests” who have tried to obstruct moves.

He acknowledged there was little chance of swift congressional review of any Obama choice as ambassador to Cuba, especially after senior Republicans vowed to block it. While making clear that nothing was imminent, he did not rule out that Obama might put forth a nominee anyway.

As well as Monday’s ceremony upgrading the Cuban Interests Section in Washington, a Cuban flag will be hung in the lobby of the State Department, added to those of other countries with which Washington has relations, Kirby said.

Kerry and Rodriguez will meet later and hold a news conference. Washington and Havana’s top diplomats met in April during the Summit of the Americas in Panama, where Obama and Castro also held talks.

John Foster Dulles and Gonzalo Guell were the last U.S. and Cuban foreign ministers to hold a formal meeting in Washington on Sept. 22, 1958, a U.S. official said. The United States broke off diplomatic relations in 1961.

Obama’s decision to restore full diplomatic ties followed decades of mutual antagonism after Fidel Castro and his revolutionaries seized control in 1959. He has already used executive powers to ease some trade and travel restrictions despite opposition from anti-Castro lawmakers.