Just Back From Carnival Paradise: Cruising to Cuba 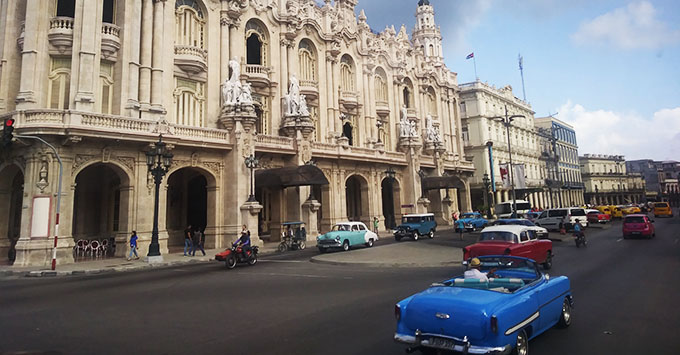 The August air was thick but the seas were calm as the Carnival Paradise sailed into Havana on one of the most scenic approaches we’ve experienced aboard a cruise ship.

Even though it was 6:30 a.m., many passengers gathered on the deck of the Carnival Paradise to gaze at the still-illuminated city lights. The sun slowly crept over the hills while a small vintage airplane circled overhead. You could feel the excitement as the ship slipped past the Capitol building, El Cristode La Habana statue, and the famous Malecon boardwalk where we got our first glimpse at Cuba’s iconic old-fashioned cars. We had come a long way from Tampa, but had waited even longer for a chance to visit Cuba.

Carnival’s Paradise is the first ship from the Carnival fleet to sail to Cuba since the embargo — and the only cruise ship currently sailing from Tampa to Havana — but the journey is not unprecedented. In the early 1930s, a passenger ship named the SS Florida briefly sailed the Tampa-Key West-Havana route. Now, we were following in the steps of history and Carnival knew how to make it memorable.

Onboard the Carnival Paradise, the Cuban flag hung next to the American one, and the entertainment program was loaded with Cuba-themed activities. First off, there was an informative briefing so everyone knew what to expecting regarding visas and debarkation. Cruise ship passengers can travel to Cuba through the People to People program, and are required to obtain a visa (Carnival helps with this). Currently, passengers can experience Cuba on approved Carnival tours, or go out in Cuba independently if they can fulfill cultural requirements (although the ability to go out on your own will likely be changing in the near future, as President Trump’s crackdown on Cuban travel goes into effect).

People to people visas stipulate that tourists can’t just spend their time on the beach; they have to learn about Cuba’s heritage to satisfy the educational category of the visa. These formalities may seem like a nuisance, but we found that they only enhanced my experience in Havana and any doubts we had about a party cruise line’s ability to offer an in-depth cultural experience were put to rest.

In addition to the technical briefing, the ship also hosted fantastic, informative lectures on Cuba with power-point slides about the country’s culture, religion, music, and history. These lectures are common on river cruise ships, but are rare on mainstream cruises. We were surprised at the large number of people in attendance for a lecture on a ship known for partying, but passengers were very curious about Cuba.

Our first stop was Key West, and while Carnival’s excursion program in Cuba (now called Carnival Adventures) is fantastic, we felt that there was a missed opportunity in Key West. The island is closer to Cuba (90 miles) than mainland Florida and has a rich history with Cuba — yet there weren’t any Cuba-themed excursions. For some background on the relationship between Cuba and Key West, we highly recommend that cruisers stop by the San Carlos Institute, a historic Cuban civic center (located right on Duval Street).

After departing Key West, we sailed overnight to Havana and were treated to the “Amor Cubano” show in the theater with the Carnival performers, followed by a “Havana Nights” deck party with dance competitions and Cuban music — getting us even more excited about our arrival.

Another highlight about the cruise was that Paradise’s itinerary included an overnight stop in Havana to experience the city’s legendary nightlife. Evening shore excursions to the famous Tropicana Cabaret and the Parisien Cabaret at the iconic Hotel Nacional are also available through Carnival, however these shows can be booked on your own (in advance) for a fraction of the price. Local Cuban entertainers also came onboard to perform live salsa music.

Carnival’s daytime excursion program included 16 “adventures” — most lasting around four hours. After going through immigration and exchanging currency in the terminal (this process actually went much faster than expected), we boarded our air-conditioned bus. We chose the “Local Flavors and Traditions of Havana,” where our first stop was the legendary Plaza de la Revolución. As we rode past the Spanish colonial buildings of Old Havana, our fantastic guide told us about the revolution, Cuba’s education and health care, and some of the challenges they face today. Next, we tried Cuban rum, cigars, and coffee and we learned the proper way to smoke a Cuban cigar. A three-course lunch followed in a privately-run restaurant, and when we asked our guide about places to stop for books and cigars, he took us to a fabulous little bookstore and cigar shop.

Our favorite stop on the tour was Muraleando, an artisan center fashioned from an old water tank and created with recycled art. Here, we were able to meet the local artists and listen to live music. On the way back to the port, our passionate guide had the bus stop by the artisan market upon our request – making our four-hour tour extend to six. We loved every minute of it and were glad we opted for the tour.

Like many others, we wondered what would happen to Carnival’s cruise program after President Trump’s June 2017 crackdown independent travel to Cuba. Because of the excursion program Carnival already has in place, even if going out on your own is affected by new laws, cruisers will still be able to take tours like the one we went on. In fact, the company just announced five additional Tampa to Havana cruises in 2018, and according to president Christine Duffy, Carnival has “a long-term investment in Cuba.”