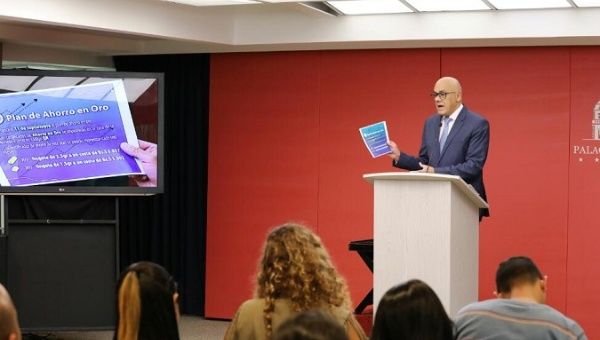 Minister of Communication and Information Jorge Rodriguez speaking to the press at the country’s presidential palace. | Photo: teleSUR

The minister said his government has received several requests from citizens abroad to return to Venezuela.

August 28 (teleSUR) The Minister of Communication and Information Jorge Rodríguez said Wednesday that his government rejects the false news that has circulated around the migrations in Venezuela.

Rodriguez mentioned the return from Peru of 89 Venezuelans, who came back to Venezuela Tuesday on a plane paid for by the government of Nicolas Maduro, after they suffered ill-treatment in Peru.

He also claimed that since then the government has received several requests from citizens abroad to return to Venezuela.

The minister also presented figures that show the number of foreigners currently living in Venezuela who benefit from free social programs offered by the Bolivarian government, highlighting the solidarity and protection of migrants, exercised by the governments of Hugo Chavez and Nicolas Maduro.

“More than US$3 billion represent health, education, food, gas, electricity, gasoline, for the more than 6.5 million Colombians, Ecuadoreans and Peruvians migrants who are in Venezuela,” said Rodriguez.

He also recalled that in October 2017, the delegate of the office of the United Nations (UN) for the treatment of refugees, “recognized the work that Venezuela has done in this matter.”

“Venezuelan brothers and sisters who have gone to other countries are being used in a barbarian, criminal and xenophobic manner by xenophobic and racist governments, as is the case of the governments of Colombia and Peru, which promote of media hatred of Venezuelans,” he said.

Jorge Rodríguez described the governments of Colombia and Peru as “hypocritical” and urged them, as well as the international media that use the migration figures as a political weapon against Venezuela, to say “the truth”.