John Perry: ‘Opposition behind the violence in Nicaragua’ 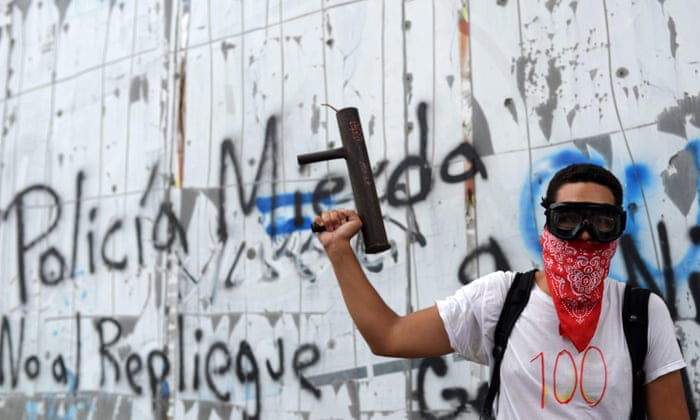 Your report says Daniel Ortega, Nicaragua’s president, is facing a “nationwide revolt” by “peaceful” protesters (Ortega decries ‘terrible lies’ over protest deaths in rare interview, 25 July). I live in the city of Masaya, which was under opposition control for three months, with the streets blocked by hundreds of barricades. Here, briefly, is what happened.

Public buildings and the houses of government supporters were burnt down by protesters; shops were ransacked; most businesses and all banks and schools were closed. The main secondary school for 3,700 pupils was burnt out twice. The police station was under siege for 45 days, so no police were on patrol. No cars or taxis could use the streets; passing the barricades on foot involved being checked by youths with weapons and on occasion threatened. Dissent was met with violence (before the barricades went up, I took part in a “peace” march which was pelted with stones). At first protesters had homemade mortars, but later many acquired more serious weapons such as AK-47s; paid troublemakers manned the barricades at night-time. A police official captured nearby was tortured and then killed, his body burnt at a barricade.

Although the police, who regained control of the city on 17 July, were well armed, there were only three casualties, including a policeman. People came out on the streets, dancing, singing and offering the police food and drink (similar scenes occurred elsewhere). Of course, the community remains very divided but, contrary to your reports, Masaya is far more peaceful than it was when under the control of the protesters. Before April, indeed, Nicaragua was one of the safest countries in Latin America; we look forward to it recovering that status very soon.
John Perry
Masaya, Nicaragua